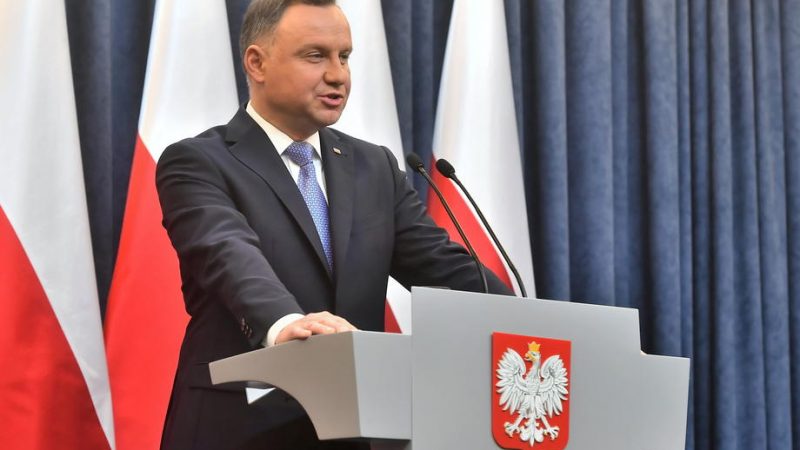 “I will submit to the parliament’s speaker a presidential draft of an amendment of the law of Supreme Court,” the president said. [EPA-EFE /Andrzej Lange]

The regional court in Warsaw decided to discontinue the trial against writer Jakub Żulczyk who called President Andrzej Duda “a moron.” The decision was not welcomed by the ruling Law and Justice (PiS) party, of which Duda was a part until 2015.

Last year, Żulczyk publicly announced he was accused of insulting the head of state by Warsaw’s prosecutor, which could result in a three-year prison sentence under the country’s criminal code.

This was rejected by the writer, who said his statement reflected “his care about the country’s fate”. The comments were made in reaction to the president congratulating US President Joe Biden following his election in 2020.

At the time, Duda congratulated Biden on “his presidential campaign”, not for his victory. According to many, this showed that Duda had expressed hope ex-President Donald Trump would still win.

“The defendant did not commit any crime, so he may not be punished,” Judge Tomasz Julian Grochowicz said Monday. He also stressed that public office like that of a head of state “must involve a larger risk of public criticism.”

In the judge’s view, “overprotection of the president at the cost of freedom of speech may lead to artificial upholding of the authority of institution,” whereas “excessive engagement of a public institution in defending the president’s office may lead to suppressing criticism.”

The court’s ruling was welcomed by numerous constitutionalists, linguists and cultural personalities, who lauded it as an important confirmation that freedom of speech in Poland still exists and is respected.