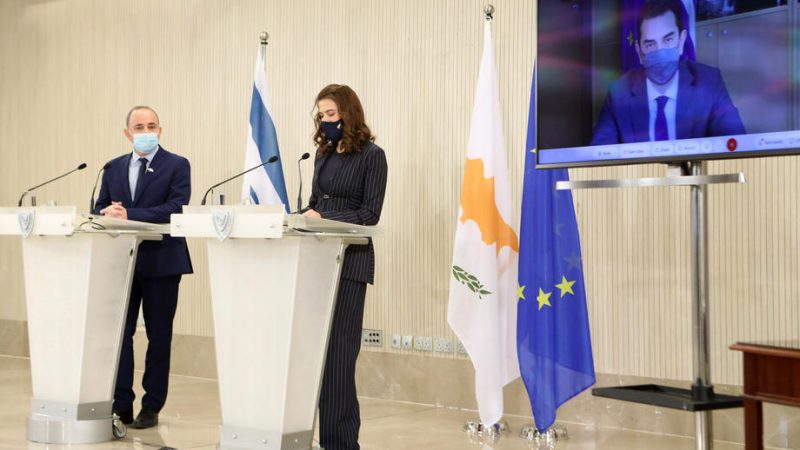 The agreement was signed at the Presidential Mansion in Nicosia via teleconference between the Greek Environment and Energy Minister Costas Skrekas and his counterparts Natasa Pilides and Yuval Steinitz.  [EPA-EFE/CYPRIOT PRESS OFFICE]

Greece, Cyprus, and Israel have signed a trilateral Memorandum of Understanding for the construction of an underwater power cable that will run through the Mediterranean seabed and act as an emergency back-up power source. The cost of the power cable has been estimated at €759 million and will be partly funded by the EU.

The agreement was signed at the Presidential Mansion in Nicosia via teleconference between the Greek Environment and Energy Minister Costas Skrekas and his counterparts Natasa Pilides and Yuval Steinitz.

The cable will be constructed by the EuroAsia Interconnector consortium by 2024 and will span across about 1,500 kilometres in length and up to 2,700 metres in depth. It will also have a voltage of 1,000-2,000 megawatts (MW).

“EuroAsia Interconnector will contribute decisively to end Cyprus’ energy isolation, the integration of renewable energy sources and the shielding of the electricity networks,” the Greek minister has said.

According to his Cypriot counterpart, this is “a decisive step towards ending the island’s energy isolation, and consequently, our dependence on heavy fuels.”

Israeli Minister Steinitz added that the cable will “allow us to receive electricity backing from the power grids of the European continent in times of emergency and more importantly will also support our ability to significantly increase reliance on solar power generation.”

The EU is partly funding the construction of the power cable as a “Project of Common Interest” (PCI). The ambitious plan has been in progress for some years now, and it was almost derailed by the Greek government’s decision to proceed with the connection of the mainland to the island of Crete, a detail that initially was a part of the trilateral project.

Greece tried to bring the timetable of its island connection forward, having to phase out coal and oil electricity production by 2023, while InterAsia Interconnection was scheduled initially for 2025.

Now EU authorities will have to access the revised plan to see whether connecting Cyprus and Israel to Europe’s mainland power source is still a funding priority, under revised terms. (Alexandros Fotiadis, Theodore Karaoulanis | EURACTIV.gr)