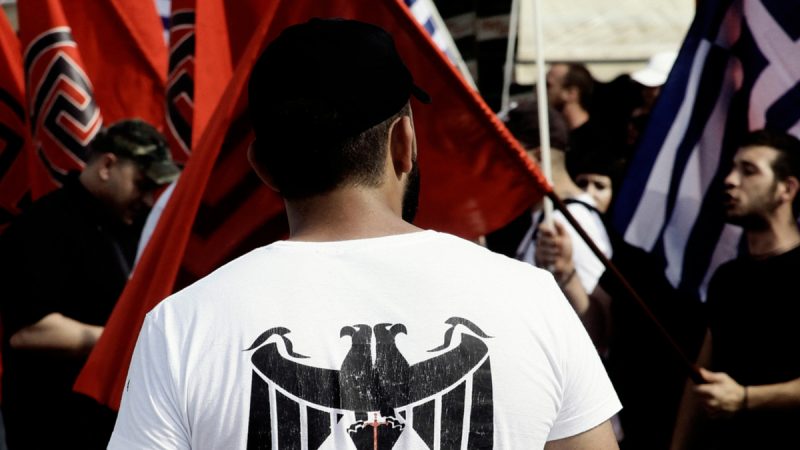 A new attack was also reported on Friday as 150 neo-Nazis set up barricades outside the school, threw firecrackers and stones against journalists. [Shutterstock/ Alexandros Michailidis]

A group of ultra-right persons has reportedly attacked members of the Communist Youth and the Communist Party in Thessaloniki, injuring at least three people. This comes after neo-Nazi groups also allegedly carried out a series of attacks in Thessaloniki last week, targeting students at anti-fascist rallies, journalists, and even police officers.

On Sunday, the far-right supporters used thick chains and tasers. Among the three injured, two were given first aid and returned home, while a 22-year-old was transported by ambulance to a public hospital.

On Tuesday, the events started outside a school building when a hooded neo-Nazi attacked students with iron bars, bats, and stones. Videos, published in Greek media, and seen by AFP reporters, show young persons making Nazi salutes. According to some of the students’ reports, police outside the school “did not intervene”.

Clashes continued on Wednesday when the neo-nazi groups within the school targeted a Communist Party Youth (KNE) demonstration. Masked neo-nazi’s trapped pupils inside the school, and two of them were seriously injured and had to be treated in hospital. This time the riot police intervened with tear gas. Six people were arrested, and 40 others were detained.

Golden Dawn’s Youth Front – of which many key members were convicted of running a criminal organisation and sent to prison by the Greek court last year – issued a statement following Tuesday’s attack. They congratulated the perpetrators “for their dynamic reaction against the provocations and the attempts to appropriate their mobilisations for nation-hostile purposes.”

A new attack was also reported on Friday as 150 neo-Nazis set up barricades outside the school, and threw firecrackers and stones against journalists, reportedly while the police were present. They also targeted police officers. Then, they rallied across the neighbourhood.

The Greek education ministry has condemned the violence and called for a prosecutor’s probe into the incidents. However, alternate Education Minister Angelos Syrigos stated that “those who attacked the fascists also exercised violence” and that “the most important thing is to condemn violence wherever it is coming from.”

Opposition party Syriza and other smaller left parties criticised the statement, pointing out that fascist groups could not be equated with anti-fascist youth organisations.

It appears that the extreme right problem in Greece did not disappear with last year’s Golden Dawn conviction. Golden Dawn has even started to feature in the polls again, scoring more than 1.5%.

2 responses to “Greece: The Neo-Nazi snake wakes up again”