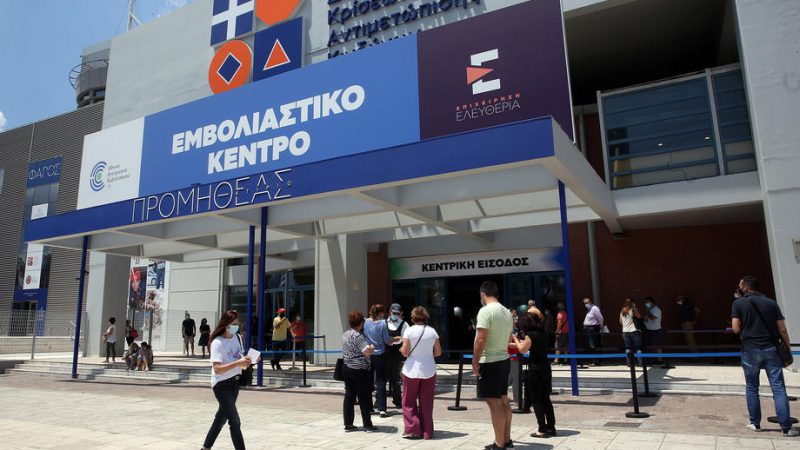 People wait outside a vaccination centre for their turn to get a dose of a vaccine against Covid-19, in Athens, Greece. [EPA-EFE/ORESTIS PANAGIOTOU]

Greece’s National Vaccination Committee has given its green light to a fourth dose of coronavirus vaccine for the immunocompromised and those who suffer from serious chronic diseases. Meanwhile, the EMA opposes a fourth jab for the general population.

The fourth dose will be administered three months after the third dose and will be considered as “booster” dose for the immunocompromised.

Experts from the National Vaccination Committee believe that the fourth dose of the vaccine will offer greater protection to those who are immunocompromised and at greater risk of becoming seriously ill with the virus.

According to ECDC figures, Greece’s vaccination rate remains below the EU average as only 66.3% of the total population has been fully vaccinated while 35.3% have also received a booster dose.

However, on Tuesday, the European Medicines Agency (EMA) expressed doubts about giving a fourth vaccine shot to the general population, saying repeated boosters were not a “sustainable” strategy, AFP reported.

A Commission source told EURACTIV that the data so far has shown that a third “booster” jab could offer three times more protection compared to the previous two doses.

This in practice means that one vaccinated with three doses could ensure immunity against COVID for “at least 12 months”, the source said.

However, Moderna CEO Stephane Bancel said the efficacy of boosters against COVID-19 would likely decrease over time, and some people may need a fourth shot by the autumn.