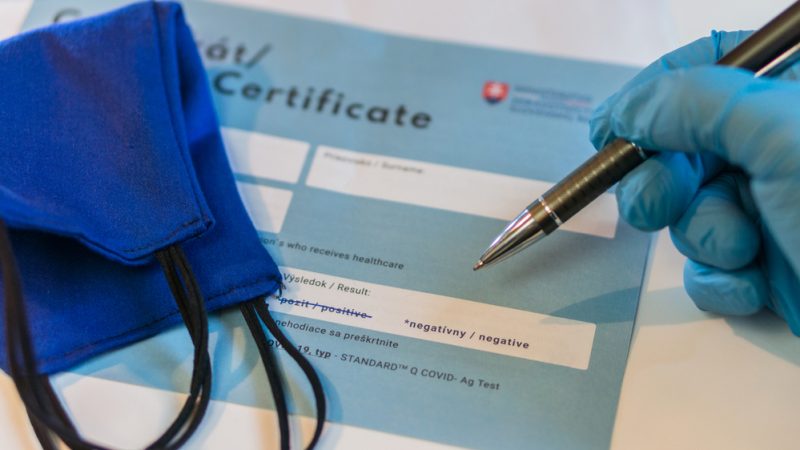 ECDC issued a report on Monday (15 February) saying it backed a vaccine certificate for COVID-19 "for medical purposes". [Shutterstock/Ales_1985]

Many EU countries are interested in exploring the Greek proposal of a digital certificate that would allow people who have received the vaccine to travel “without the need to show a negative COVID-test or undergo quarantine restrictions,” Prime Minister Kyriakos Mitsotakis told Bloomberg in an interview on Monday.

“I think the reason is that their citizens want to travel and they want to make travel as easy as possible, especially during the summer holidays,” the prime minister added, confident that EU states will come to an agreement on the Greek proposal.

Regarding the country’s national vaccination plan, the Greek PM said the first priority was to administer a vaccination to as many people as possible before the summer.

So far, EU member states have been divided over the issue, saying it’s not the proper moment to discuss such a topic considering that the general population has not been vaccinated. For instance, the European Centre for Disease Prevention and Control (ECDC) opposes such an option.

ECDC issued a report on Monday (15 February) saying it backed a vaccine certificate for COVID-19 “for medical purposes”.

“This is not the same as a ‘vaccine passport’ that would permit international travellers to be exempt from complying with travel risk reduction measures, and for which ECDC considers there is insufficient evidence about the efficacy of vaccination in reducing transmission to exempt travellers with proof of vaccination from quarantine and/or testing.”