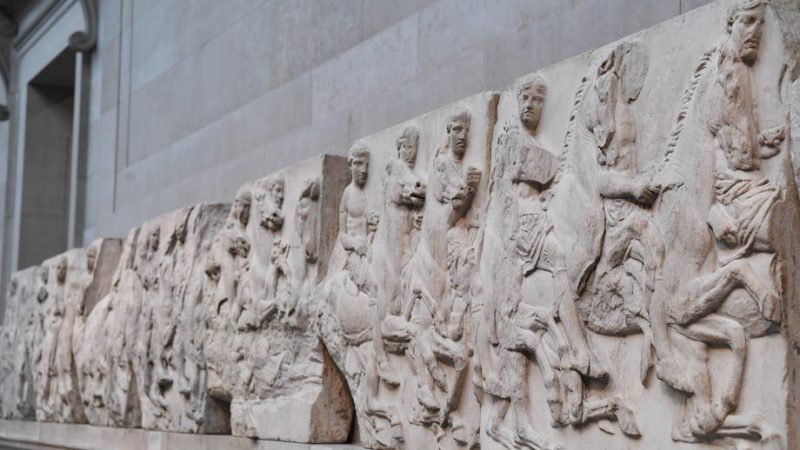 Greek Prime Minister Kiriakos Mitsotakis has asked once again for the return of the Parthenon marbles. [EPA-EFE / FACUNDO ARRIZABALAGA]

Greek Prime Minister Kiriakos Mitsotakis has asked once again for the return of the Parthenon marbles in an article published in the Daily Mail on Sunday.

​“​Only a handful of Britain’s past Prime Ministers have studied classics at university. Fewer still would ever have shouted about the influence of Ancient Greece on their political thinking. None, I suspect, cited an Athenian statesman from the 5th Century BC as one of their heroes. And then came Boris Johnson. Ever the contrarian, Britain’s Prime Minister has done all three,” Mitsotakis wrote.

Mitsotakis appears​ to be encouraged by his visit to the UK a week ago, despite Boris Johnson’s reluctance to engage in intergovernmental negotiations over the demand for the repatriation of the 5th-century BC artwork.

According to the Telegraph, the British public opinion is on his side with a “clear and growing majority”. The newspaper cites a 2018 poll where 56% of Britons were in favour of the return of the marbles to Greece.

“My intention is to continue working hard until their final return to the Acropolis Museum,” ​Mitsotakis said at the Science Museum in London after meeting his counterpart last week.​

“Greece is ​​prepared to consider allowing some of the world’s most iconic artefacts – pieces that have never left our shores — to be displayed at the British Museum in return,”​ he wrote.

“Your greatest ever poet, Lord Byron, was one of many Britons who fought with us in the war of independence. In 1824, Byron died a hero to Greece, following the second siege of Missolonghi. Nearly 200 years after Byron’s death, I believe that the classical scholar in Boris Johnson knows that he has a unique opportunity to seize the moment and make this generation the one that finally reunites the Parthenon Sculptures,” he added.