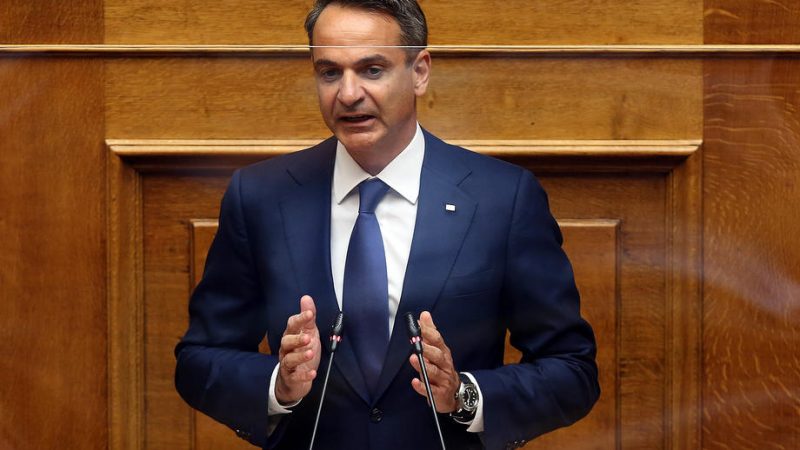 The country is breaking records in COVID-19 cases, and the number of patients in ICUs has been seeing a daily increase. However, the PM said that “the pandemic is not out of control”. [EPA-EFE / ORESTIS PANAGIOTOU]

In an interview with Greek TV channel MEGA on Wednesday, Greek PM Kyriakos Mitsotakis made it clear that no new lockdown will be imposed in the country due to the increase in COVID-19 cases.

The country is breaking records in COVID-19 cases, and the number of patients in ICUs has been seeing a daily increase. However, the PM said that “the pandemic is not out of control”.

He explained why he does not foresee another lockdown in the future.

“It is unfair to impose restrictions on the majority to deal with a problem that affects the minority since we have the vaccines,” said Mitsotakis.

“It also entails great economic, social, and educational costs,” the prime minister said, adding that three out of four citizens have taken a jab. The actual numbers according to the National Health Organisation show that 63% of people are fully vaccinated.

Mitsotakis insisted that what matters is the way the virus spreads and the pressure on the health system, not the number of cases.

No to compulsory vaccination

“We are hitting a wall of reaction by the unvaccinated,” said Mitsotakis.

“The more we force the compulsory vaccination, the greater the reaction” Mitsotakis said. He added that the government’s target is to convince at least half of the unvaccinated to finally get a jab.

He stressed that “the battle for the first dose is not lost” as 6-8,000 people are vaccinated every day. He estimated that if the country succeeds in vaccinating 20,000 daily, it will quickly find itself in a better position. Earlier, the Minister of Economy and the Minister of State had made statements attributing the anti-vaxxer movement to Greece’s geography in the Balkans.

Unlike in restaurants and bars where showing a recent test is now mandatory, the Prime Minister justified the decision not to force similar strict precautions in churches.

He said such measures cannot apply to churches, considering that there is no one to control at the entrance – as in the shops – the certificates.

However, it is clear that churches have proven to be hotbeds of transmission on several occasions. Last year during the celebration of St Demetrius in Thessaloniki, there was an exponential increase in cases. This year cases are on the rise again in the city, which is currently on alert.

The opposition says the church was excluded from the new measures as Mitsotakis does not want to clash with his “Orthodox” electorate.