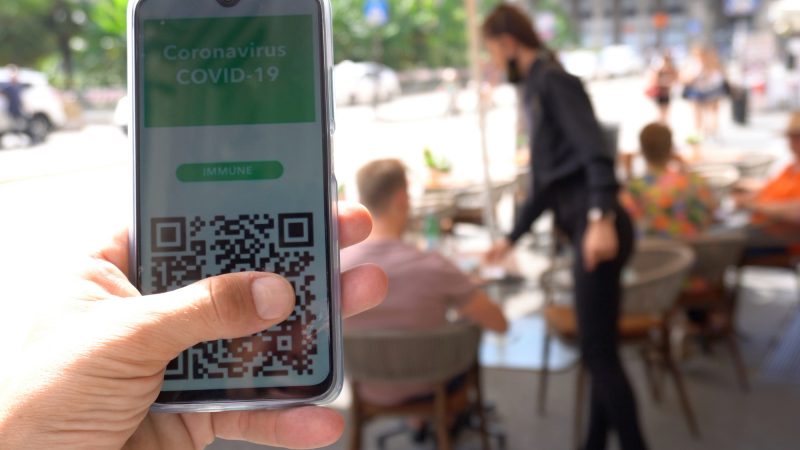 From Thursday, the Green pass comes into force. [Shuttertsock/DELBO ANDREA]

The introduction of a mandatory Green pass for all indoor activities has become the main topic of the Bulgarian election campaign. On 14 November, Bulgarians will vote in both parliamentary and presidential elections. From Thursday, the Green pass comes into force.

The two largest parties, ex-PM Boyko Borissov’s party GERB and the socialist party BSP, demanded the resignation of caretaker Health Minister Stoycho Katsarov, who issued the order for the mass use of the Green pass. President Rumen Radev defended the minister, who he appointed, and said he would not replace him.

The Minister of Health imposed the restrictive measures after nearly a month of insistence by the Chief Health Inspector Assoc. Prof. Angel Kunchev. As expected, they caused controversy because the authorities were forced to close schools in most large cities due to increased morbidity. Many Bulgarians will have to work home to take care of their children who cannot go to school. For a significant part of society, the closure of schools will have the effect of a partial lockdown.

Even proponents of mass vaccination have criticised the caretaker government for the late introduction of the Green pass. The Minister of Health announced the measures two days before they enter into force. The minimum time for full vaccination with the Pfizer vaccine is 21 days and 28 days for the Moderna jab.

Nevertheless, the introduction of the obligatory certificate from Thursday motivated some Bulgarians to get the jab. Queues lined up in front of vaccination stations in big cities. The preferred vaccine was the Johnson & Johnson single dose. The certificate becomes valid 14 days after the vaccination process is complete.

GERB and BSP say vaccination should be voluntary. However, the parties are not proposing alternatives.

Hospitals in the country are full, and the fourth wave of the pandemic is at its peak. In the last two days, more than 5,000 people have been infected per day, and the percentage of positive tests is over 20%. The alternative to the green certificate system is a lockdown, which the caretaker government is trying to avoid.

Bulgaria ranks last in the EU in the number of vaccinated citizens at only 20%.