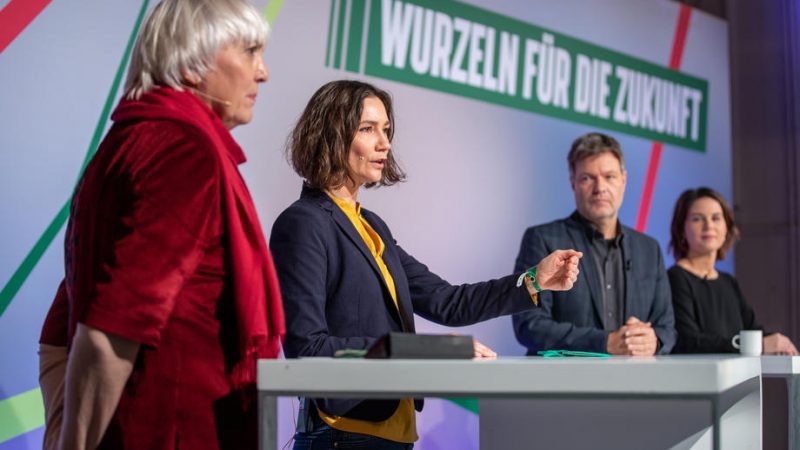 The announcement of the results of the digital ballot of Buendnis 90 / Die Gruenen, in the Alte Muenze, Berlin, Germany, 06 December 2021. [EPA-EFE / ANDREAS GORA / POOL]

Of the 71,150 Greens’ members that had cast a legal ballot, 86% voted to enter a “traffic light” government alongside the social democrat SPD and the business-friendly liberal FDP. The Greens had consulted their party members in an online vote on whether the party should sign up to the comprehensive coalition agreement presented on 24 November.

One of the key challenges for the next German government would be to “reconcile ecological questions and economic necessities,” explained Robert Habeck, minister of economy and climate in-waiting.

The race to have the first-ever three-way German government in place is now on. On Tuesday, the parties are to present the signed 178-page coalition treaty, after which Chancellor in-waiting Olaf Scholz wants to be elected by the German parliament on 8 December.

As early as Thursday, Berlin could resume normal operations. This prospect has most ministry sources excited, as the ministries will soon be equipped with a new mandate and new guidelines as the conservative union of CDU/CSU moves into opposition.

As for the health minister position, it will go to the SPD’s Karl Lauterbach, a health expert who rose to prominence during the COVID-19 pandemic despite little political backing within his party. Lauterbach, like the Greens’ Cem Özdemir, is a populist pick with little clout within the party but with overwhelming public support.