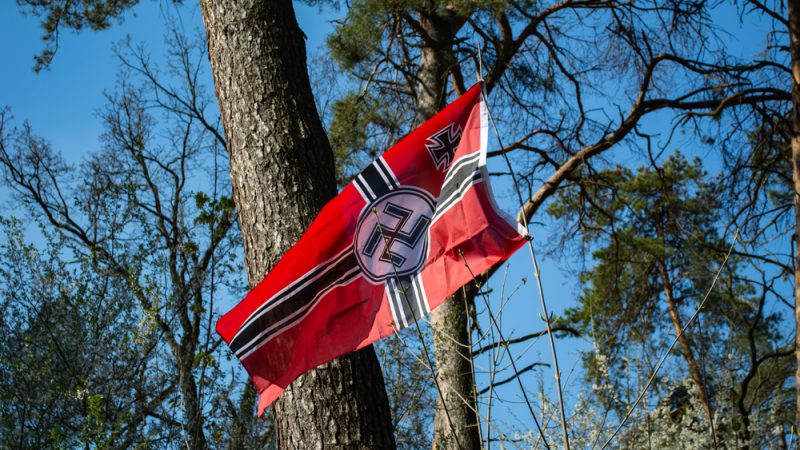 In a first for Finnish justice, five members of the neo-Nazi Kohti Vapautta group stand accused of marching in public with a swastika flag, in a trial that opened on Tuesday. [Shutterstock/Oleksandr Yuchynskyi]

The District Court in Helsinki will decide whether waving Nazi swastika flags should be considered inciting discrimination against ethnic, sexual and other minorities in a country where the swastika is not banned by law – unlike in Germany and Sweden.

In a first for Finnish justice, five members of the neo-Nazi Kohti Vapautta group stand accused of marching in public with a swastika flag, in a trial that opened on Tuesday.

According to state prosecutor Raija Toiviainen, the swastika stands for threatening, racist and abusive messaging. The accused are denying all charges.

The flags were flown by the neo-Nazi group on Independence Day on 6 December, 2018, when the group marched across the capital. Police intervened and removed the flags from the march by force.

Another incident in the case concerns the demonstration outside a Helsinki school in April of the same year, which included a racist speech targeted at immigrant pupils and young people that was then published online.

The case is hoped to bring clarity on the somewhat ambiguous jurisdiction. Former interior minister Kai Mykkänen said he opposed a ban on displaying swastikas, since selecting freedom of speech rights in legal terms may be problematic.

In a court decision last year, the Kohti Vapautta group was declared bankrupt. The court also held that the group should be shut down for the general good of society, because of its violent acts and militia-like structure. (Pekka Vänttinen | EURACTIV.com)