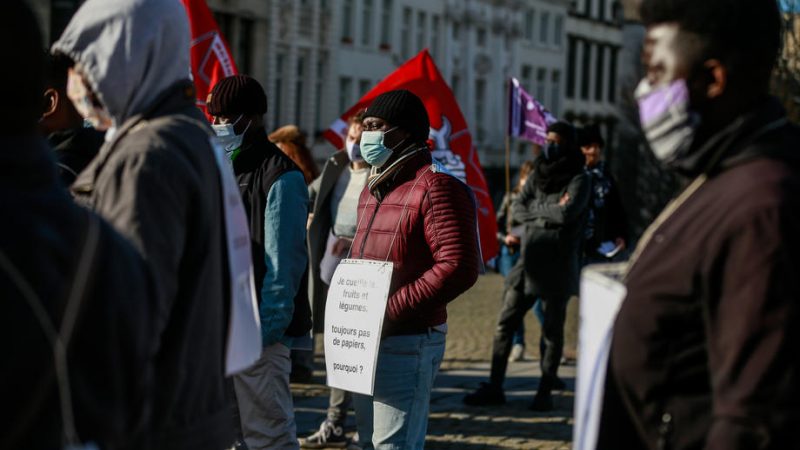 People take part in a demonstration organized by the 'Coordination des sans-papiers de Belgique' to ask the Belgian government for the immediate regularization of undocumented migrants in Brussels, Belgium, 26 February 2021. [EPA-EFE/STEPHANIE LECOCQ]

Concern over a weeks-long hunger strike by hundreds of undocumented migrants in Belgium’s capital has mounted this week after four men stitched their lips shut to stress their demands for legal recognition and access to work and social services.

Aid workers say that more than 400 migrants, holed up at two Brussels universities and a baroque church in the heart of the city, stopped eating on 23 May and many are now very weak.

Many of the migrants, who are mostly from South Asia and North Africa, have been in Belgium for years, some for more than a decade, but say their livelihoods have been put at risk by COVID-19 shutdowns that led to the loss of jobs.

The Belgian government said it will not negotiate with the hunger strikers over their plea to be granted formal residency.

Junior minister for asylum and migration Sammy Mahdi told Reuters on Tuesday the government would not agree to regularise the status of the 150,000 undocumented migrants in Belgium, but is willing to hold talks with the strikers on their plight.

“Life is never a price worth paying, and people have already gone to the hospital. That’s why I really want to try to convince all persons and all organisations behind it to make sure they don’t give false hope,” Mahdi said, when asked about the hunger strikers.