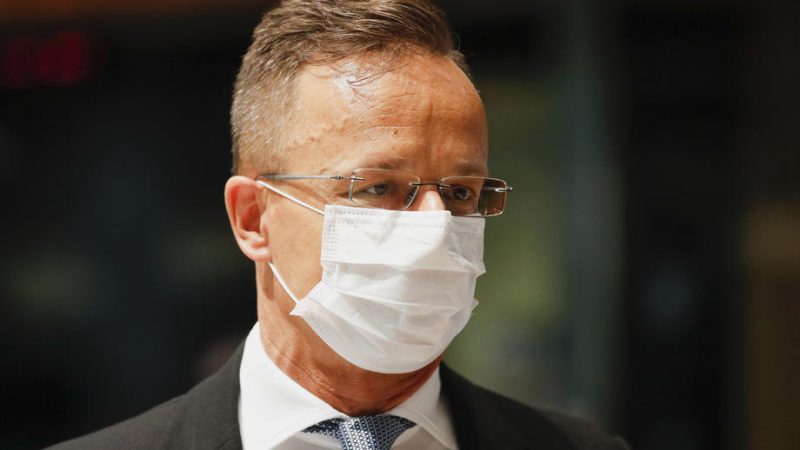 The comments came after Munich’s mayor, where the match is set to take place, backed the idea to light up the city’s arena in rainbow colours in protest against the new Hungarian law that bans the “portrayal and promotion” of homosexuality and trans identity in schools, media content and adverts aimed at under-18s passed. [EPA-EFE/JOHANNA GERON]

Hungarian Foreign Minister Péter Szijjártó has said it would be “extremely harmful and dangerous to mix sport and politics,” in response to reports that the stadium hosting Wednesday’s UEFA Euro 2020 match between Hungary and Germany could be painted in rainbow colours in solidarity with the Hungarian LGBTQI+ community, national news agency MTI reported.

The comments came after the mayor of Munich, where the match is set to take place, backed the idea of lighting up the city’s arena in rainbow colours in protest against a new Hungarian law that bans the “portrayal and promotion” of homosexuality and trans identity in schools, media content and adverts aimed at under-18s.

“Historical experience shows that this is wrong, and if anyone, it is the Germans, who certainly know this,” Szijjártó said on Monday at the meeting with his EU counterparts in Luxembourg.

Markus Söder, leader of Bavaria’s ruling Christian Social Union (CSU), spoke out in favour of the idea, saying it would be a “very good sign” and  “a symbol of freedom in our society.”

More than 108,000 people have already signed an online petition backing the plan, which is likely to be shot down by UEFA.

Lighting up the stadium in rainbow colours would be against organisation’s rules, according to Bild, since the 11 arenas hosting the matches can only display UEFA’s own colours and those of the host countries.