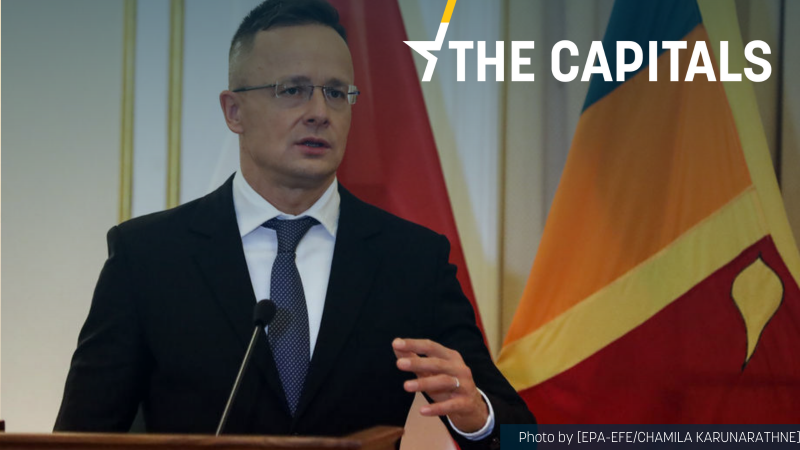 Listing several instances of Hungary’s support for Ukraine during the past years, Szijjártó accused Ukraine of continuing to strip the Hungarian ethnic minority of their rights. [EPA-EFE/CHAMILA KARUNARATHNE]

If Ukrainians do not back down from their anti-minority policy, it will very much limit the Hungarian government’s ability to provide any kind of support, even in this conflict, Foreign Affairs Minister Péter Szijjártó said in an interview with pro-government Magyar Nemzet outlet on Wednesday (26 January), Telex reported.

Budapest and Kyiv have been locked in a row over minority rights since Ukraine’s parliament in 2017 adopted the law “On Ensuring the Functioning of the Ukrainian Language as the State Language,” which Budapest says tramples on the rights of the Transcarpathian ethnic minority to study in Hungarian.

The number of ethnic Hungarians in Ukraine, most of whom live in the Transcarpathia region, is estimated at 140,000.

In turn, Hungary continued to block Ukraine’s cooperation with NATO and the holding of Ukraine-NATO Commission talks.

Foreign Affairs Minister Szijjártó now said “whatever gestures we have made so far, we have received virtually no positive feedback in return.”

Listing several instances of Hungary’s support for Ukraine during the past years, Szijjártó accused Ukraine of continuing to strip the Hungarian ethnic minority of their rights.

‘Also in the context of the security situation in Eastern Europe, I have told our EU and NATO colleagues frankly that if the Ukrainians do not back down from this policy, it will very much limit the Hungarian government’s ability to provide any kind of support to Ukraine, even in this conflict’, Budapest’s chief diplomat said.

Asked earlier if there is a reason for worry over the escalating security situation between the West and Russia, Szijjártó said Hungary does not want to see “to see a return to the Cold War and its psychosis.”

‘We are seeing the verbal warfare between East and West, we are seeing them threatening each other, and we are concerned about that. It is in our national security interest that the United States and Russia talk to each other, consult each other because there is no alternative to dialogue’, he said.

Szijjártó later said that foreign policy should be conducted based on national interests.

The Hungarian interest is clearly to maintain a pragmatic, normal relationship with Russia based on mutual respect, he added.