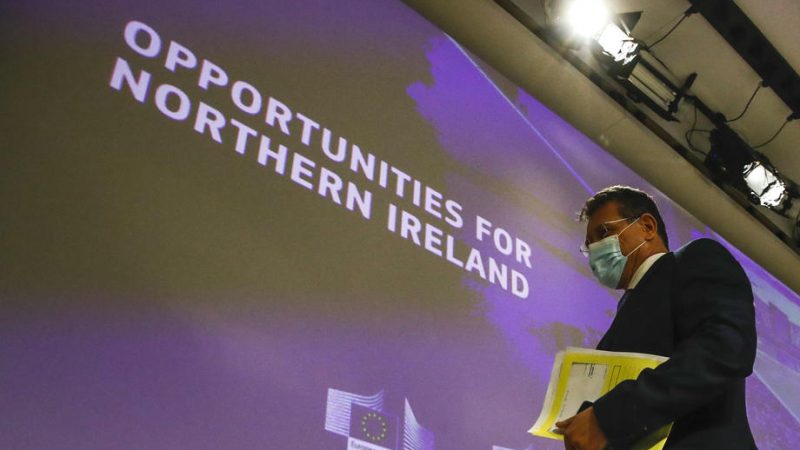 The measures put forward by Brussels would significantly cut customs processes on goods moving between the EU and UK. [EPA-EFE / OLIVIER HOSLET]

The Irish government has voiced its support for the EU’s Northern Ireland protocol proposals, published this week.

Foreign Minister Simon Coveney thanked Commission Vice President Maroš Šefčovič, saying that “the European Commission has listened to the concerns of the people of Northern Ireland and has produced far-reaching proposals that comprehensively address the practical, genuine issues that matter most to them.”

The measures put forward by Brussels would significantly cut customs processes on goods moving between the EU and UK, a topic of intense debate and mounting tensions in recent months.

Taoiseach Micheál Martin applauded Šefčovič’s work and engagement on the topic in Ireland, saying that “the European Commission has now demonstrated that they are really open and willing to bring a resolution to this…I think there’s a real responsibility on all parties, including the UK government, to engage responsibly and seriously with this package.”

Before publication of the proposals, the British government said that the protocol needed to be fixed or risk being “ditched”.

In Northern Ireland, however, praise for the deal was not as forthcoming. The leader of the Democratic Unionist Party, Jeffrey Donaldson, said the changes “fall short of what is needed.”

“Short-term fixes will not solve the problems that have beset the United Kingdom internal market”, he added.