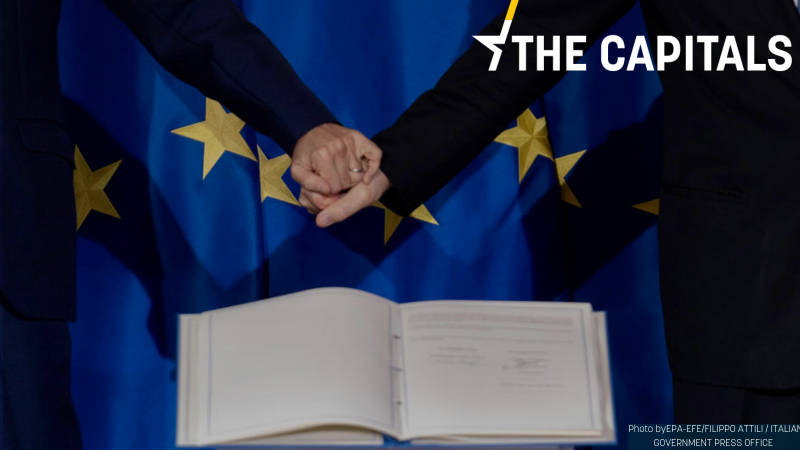 The new German government also aims for a fully-fledged European federation. But is it easy for Paris, Rome and Berlin to pick the same path toward more Europe? [EPA-EFE/FILIPPO ATTILI / ITALIAN GOVERNMENT PRESS OFFICE]

“The goal of the treaty is to create a tight cooperation between Rome and Paris to share strategic goals for a more sovereign Europe,” the State Secretary of the Presidency of the Council of Ministers Vincenzo Amendola told EURACTIV Italy.

The new German government also aims for a fully-fledged European federation. But is it easy for Paris, Rome and Berlin to pick the same path toward more Europe?

Last Friday (26 November), the leaders of Italy and France signed a treaty to strengthen bilateral ties at a time when European diplomacy is being tested by the departure of German Chancellor Angela Merkel.

Amendola said the collaboration, which embraces everything from sustainable development to innovation, from culture to security, is a “more concrete tool that implements European Integration.”

Sandro Gozi, who was elected to the European Parliament in 2019 as part of French President Emanuel Macron’s Renaissance list but remained a member of the Italia Viva party, told EURACTIV Italy that he welcomes the agreement as an important step toward a more united Europe.

“This is a strong Paris-Rome initiative to reform the European Union. This treaty is even more strategic at this moment, with the Conference on the Future of Europe underway, the upcoming French presidency of the Council of the EU and the debate on the eurozone. The French-Italian treaty and the German coalition government programme are two very good news for Europe,” Gozi also said.

“We are confident that the French Presidency of the Union, which will start on 1 January 2022, will be able to tackle all the issues, in line with the Treaty signed today. The challenges ahead are enormously hard, and only with unity and ambition we will be able to succeed,” said MEP and vice-president Fabio Massimo Castaldo.

“That treaty roots the construction of the future of Europe, which must be fairer, more sustainable and open to discussion with citizens,” he said.

“Italy and France are two EU founding countries tied by a brotherly friendship and common political goals, including the desire to make permanent the issuance of common debt, inaugurated with the Next Generation EU, and the request to profoundly reform the Stability Pact, making possible green and social investments through the introduction of the Golden Rule,” he added.

However, reaching a compromise on the bloc’s economic future model between the new Paris-Rome axis and Germany will not be easy.

The new German finance minister, liberal Christian Lindner, is a known backer of austerity policies. He recently reiterated his commitment to “sound public finances”, both in Germany and Europe.