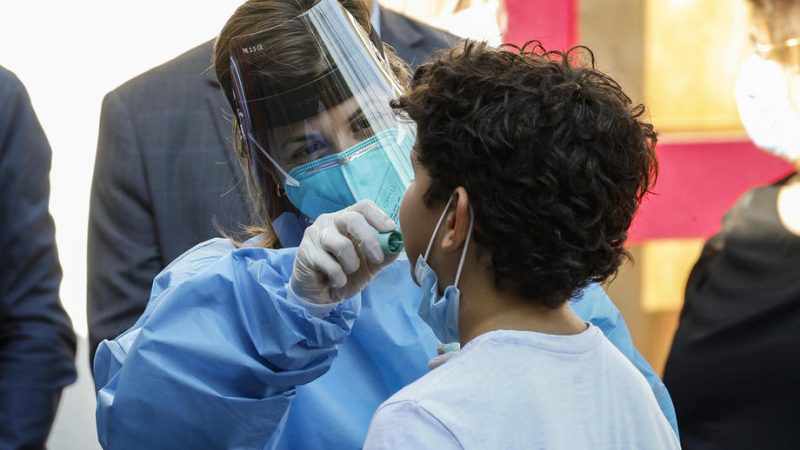 People who have not been vaccinated or recovered from the virus over the past six months have been left only with the option of testing negative every 48 hours to avoid sanctions at work. [EPA-EFE / FABIO FRUSTACI]

Data shows that a record 548,000 people were tested for COVID in Italy on Tuesday, the highest number since the start of the pandemic. The spike in tests is linked to the fact that the Covid health pass has been mandatory for all workers in the private and public sectors across the country since 15 October.

People who have not been vaccinated or recovered from the virus over the past six months have been left only with the option of testing negative every 48 hours to avoid sanctions at work. Before the mandate entered into force, 200,000 people on average had a rapid antigen test every day. Since last Friday, the number had never fallen below 300,000.

The government hoped that making the health pass mandatory would have convinced a large number of people who hesitated about getting vaccinated, but the rise in tests appears to be the main outcome of the policy.

Politicians and protesters had raised concerns about a possibly insufficient number of tests in the country given that between 2.5 and 5 million workers are still not vaccinated. Luca Zaia, the governor of the Veneto region and one of the League’s best-known leaders, had sounded the alarm on 8 October, saying that in Veneto alone at least 590,000 people of working age were not vaccinated. “Even if only half of them do not work, we would have 300-350,000 to be tested every 48 hours. It’s impossible,” he said.

For the time being, though, pharmacies seem to be handling the growing pressure, despite the discomfort caused by long queues and the distress of people who have to access pharmacies for different reasons or who need to get tested because they have actually been in contact with someone who tested positive.

On Sunday, police agents had to intervene in Turin after a fight broke out outside a pharmacy.