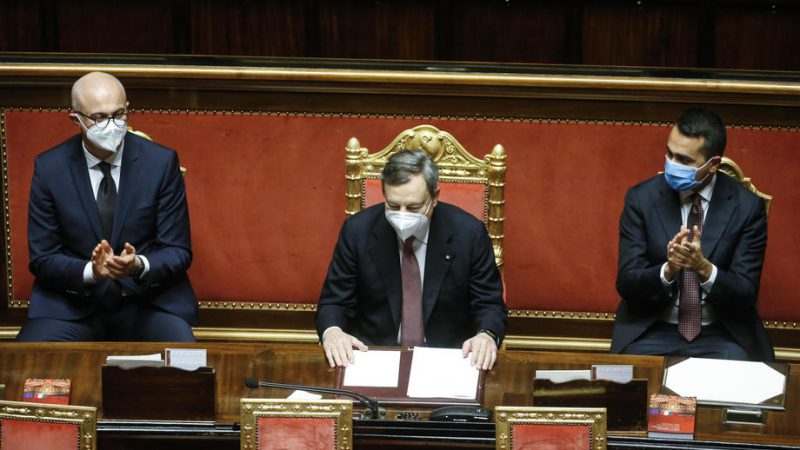 In his speech, Draghi strongly reaffirmed that Italy is part of the EU. [EPA-EFE/FABIO FRUSTACI]

The government of Italy’s new Prime Minister Mario Draghi, who was sworn into office on Saturday to be at its head, obtained the support of the Senate in a confidence vote on Wednesday.

“Supporting this government means sharing the irreversibility of having chosen the euro, and the perspective of an increasingly integrated European Union that will reach a common public budget, capable of supporting countries in times of recession”, said the former European Central Bank chief.

According to Draghi, Italy must be proud of its contribution “to the growth and development of the European Union. Without Italy there is no Europe. But, outside of Europe there is less Italy. There is no sovereignty in solitude”.

Draghi also laid out his government’s most urgent commitments, which included the supply and effective distribution of COVID-19 vaccines, and the reopening of schools. The quelling of economic effects related to the pandemic, particularly unemployment among young people and women, was also among the mentioned pledges.

Furthermore, the new PM – unexpectedly – dedicated a long part of his speech to the ecological transition and global warming, saying that “it would be a mistake to protect all economic activities” the same way, noting that “some will have to change, even radically.”

“We want a good planet, not just a good currency,” he added.