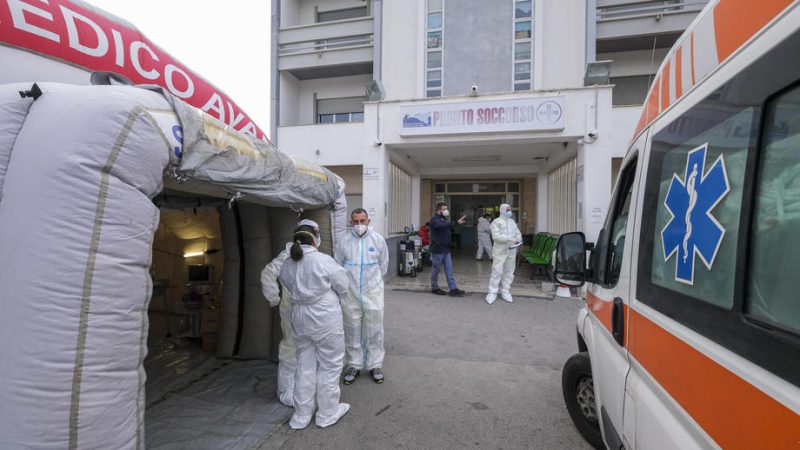 The 'advanced medical point' in tent structure at the entrance of the Cervello hospital in Palermo, Italy, 07 January 2022. [EPA-EFE/Igor Petyx]

“In the next 30 days, at current rates, we will have 2,500 deaths among unvaccinated people, deaths that could have been prevented,” Professor Sergio Abrignani, immunologist and member of the scientific technical committee of the health ministry, told Radio 24 on Sunday.

“That’s why I keep saying that not vaccinating is like riding a motorcycle at crazy speed without a helmet,” he added.

Abrignani pointed to those aged 50 and over for whom vaccination will become mandatory from Monday, saying “there are over 2 million and 200,000 unvaccinated people who contribute to 75% of admissions to intensive care and 60% of deaths.”

“In the last ten days, we have had an average of 160 deaths per day, of which 85-90 are unvaccinated,” Abrignani also said.

However; the Professor also said he was in favour of returning to in-person classes, despite principals of several schools asking for these to be delayed.

“On the restart of schools, I agree with the decision taken by the government. In a country where children can go to the movies, restaurants and bars, it would be incomprehensible to me to close the school,” he said.

Francesco Figliuolo, commissioner of the COVID-19 emergency unit, told RAI3 on Sunday that “Omicron has upset all the plans, the infections are many, but they are also linked to the number of tests which are on an average of over one million and two hundred thousand per day.”