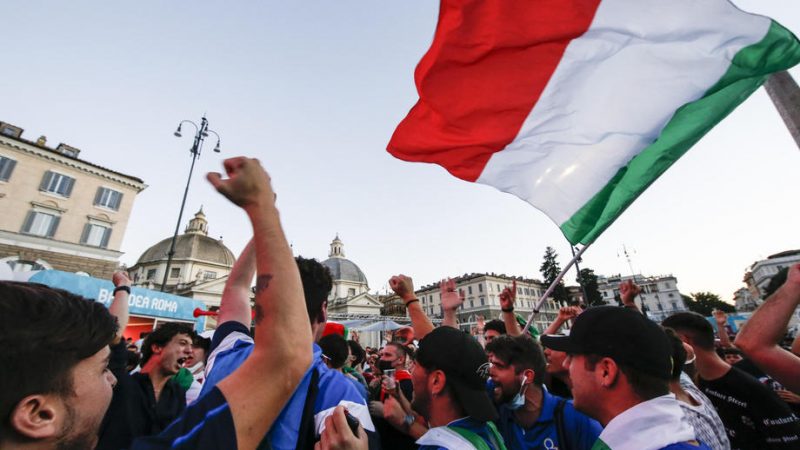 Italy fans cheer on their team as they watch the UEFA EURO 2020 round of 16 soccer between Italy and Austria at Piazza del Popolo in Rome, Italy, 26 June 2021. [EPA-EFE/FABIO FRUSTACI]

Italy has taken a number of measures before the England vs Ukraine Euro 2020 match, due to take place in Rome on Saturday, to prevent the spread of the COVID-19 Delta variant from UK travellers.

Some of the measures include checks in Rome’s airports and railway stations to monitor the arrival of fans from England, blocking (in agreement with UEFA) the sale of tickets with the cancellation of those sold from 28 June, and checks at the entrances of the Olympic stadium and in the fan zones.

The services to verify compliance with the mandatory five-day quarantine for those arriving from the UK and controls in Rome’s tourist spots will also be strengthened.

Although the British authorities have already warned supporters looking for a ticket not to go to Rome, it is not possible to exclude that groups of supporters still try to reach the capital before Saturday, trying to circumvent the bans.

“British citizens already present in the capital are welcome, but we must be ready to intervene if someone does not respect the provisions,” said the Councilor for Health of the Lazio region, Alessio D’Amato, adding that those who will go to the stadium violating the quarantine risks “even a criminal complaint for the crime of culpable epidemic, if they are positive”.

“Anyone who should arrive now from the United Kingdom will not be able to go to the stadium because the terms of the quarantine that the government has imposed have expired, and once they have returned home, British citizens will have to undergo a further 10-day isolation regime,” said the Undersecretary of the Interior, Ivan Scalfarotto.