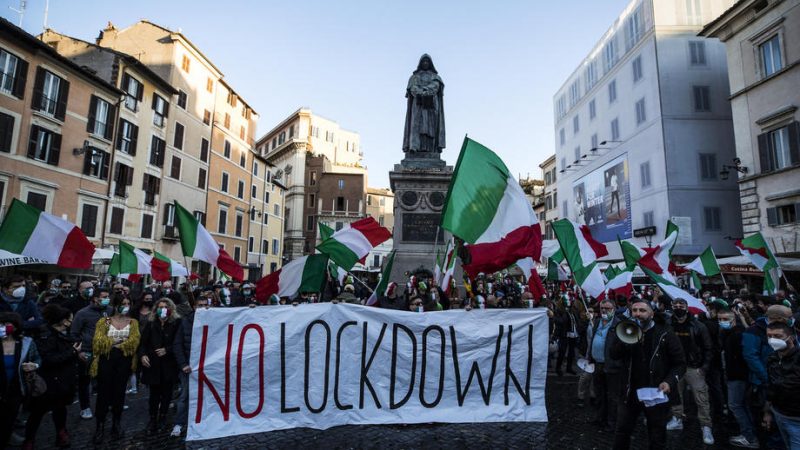 People protest during the demonstration of the 'Mascherine Tricolori' movement to say 'No to a new lockdown' at Piazza Campo dei Fiori during the Coronavirus Covid-19 pandemic emergency in Rome, Italy, 31 October 2020. [EPA-EFE/ANGELO CARCONI]

A new decree which will be enforced from Thursday until at least 3 December was signed by Prime Minister Giuseppe Conte late Tuesday night.

Among the new measures, a national curfew will apply from 10pm to 5am, distance learning will be mandatory for high school students and wearing a mask will be obligatory for elementary and middle school students, even when seated at their desks.

Capacity on local public transport will be set at 50%, museums and exhibitions will be closed completely and shopping malls will close on weekends and public holidays.

Meanwhile, a three-stage system will be used to distinguish between zones with lower and higher infection rates. While people will have to respect national measures in so-called “yellow zones”, they will not be able to leave their region or city of residence in “orange zones”.

“Red zones” will also be subject to these rules but will have to close all ‘non-essential’ shops apart from hairdressers and beauticians. Sports apart from exercise will also be banned, and distance learning will be mandatory for those in middle school too.

While it is still unknown what colour codes will be attributed to which regions, it is expected that the worst-hit regions like Piedmont and Lombardy will be classified “red”.