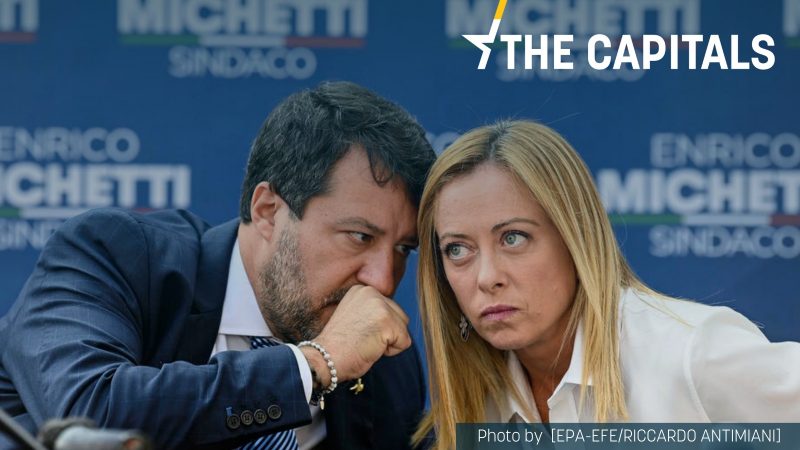 Right-wing party Fratelli d’Italia (Brothers of Italy) is now leading the right-wing coalition in the polls with 22.2%, according to polling data from EURACTIV’s partner Europe Elects.

The party has seen its popularity grow in recent years from 4.3% in the 2018 Italian elections and is now polling at 22.2%, marginally ahead of the centre-left Democratic party.

The party, led by Senator Giorgia Meloni, “is preparing to face the next elections with the prospect of going to the government,” Fratelli d’Italia EU lawmaker Carlo Fidanza told EURACTIV, referring to the next national vote expected for Spring 2023. 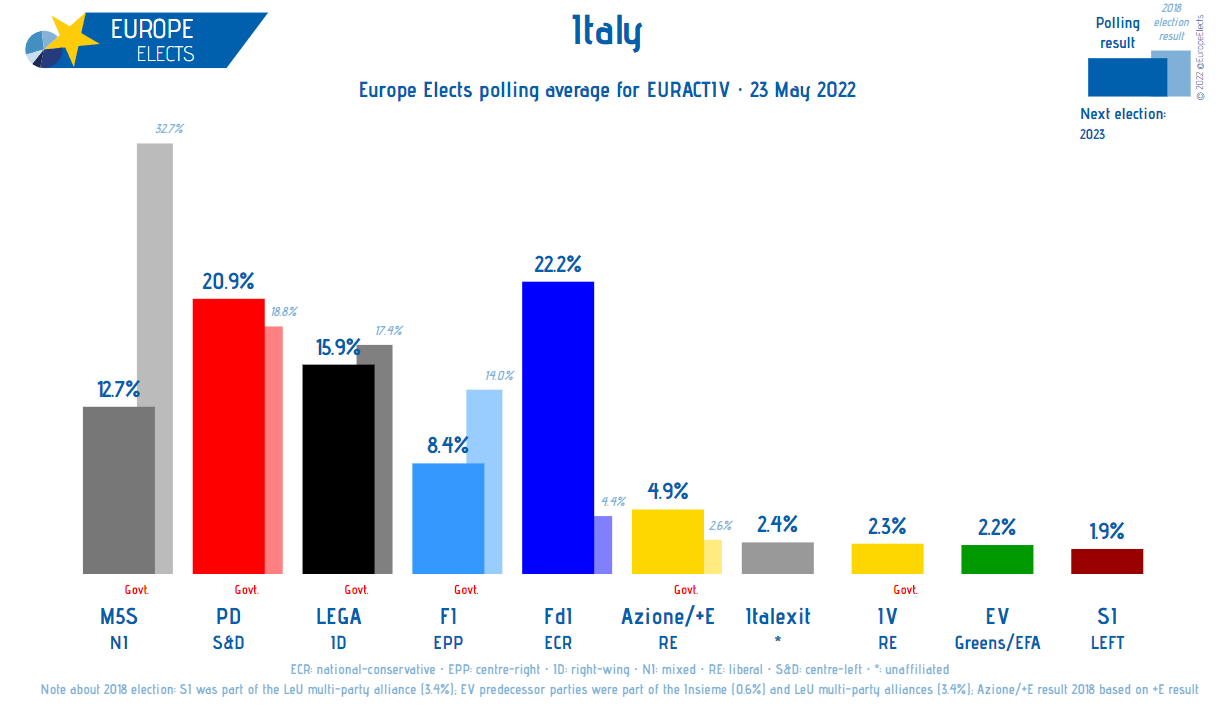 However, according to influential columnist Corrado Ocone, a right-wing government coalition is unlikely because “international balances would not allow such a government in Italy now.”

Ocone believes the Fratelli d’Italia’s growing popularity is mainly due to the party’s decision to not join government coalitions in recent years and the perception that the party is “coherent” and “organic” with no “post-ideological” features.

The latter approach characterised the 5 Stars Movement, funded by the comedian Beppe Grillo back in 2013, which has fallen from 32.7% in the 2018 elections to 13.3% support, according to Europe Elects’ data from May 2022.

“Right and left are back. Italians now tend to look for an organic and coherent vision from political parties, rather than political forces pursuing single battles,” Ocone said, explaining why Matteo Salvini’s League had lost support compared to previous years.

New right-wing approach toward the EU

Both Fratelli d’Italia and the League party are reforming their positions towards the EU, which remain nationalist, but they are no longer campaigning to leave the Union.

The MEP Fidanza defined his party as “a fully integrated national-conservative right-wing with critical but not anti-European positions.”

“We have a critical position with respect to this current structure of the European Union that has been developing, and we are unfortunately seeing it tragically in these months of the war,” said Fidanza.

“We want an EU which pays more attention to the principle of subsidiarity and thus to the sovereignty of national states,” giving back some powers to member states on different competencies. “We are in favour of a Europe of national states, a confederation where part of powers are shared at EU level in the field of security, defence, control of external borders and united market,” he added.

The head of the party’s delegation to the European Parliament, Marco Campomenosi, criticised the abolition of unanimity on migration issues at the Council, as well as transnational lists and the ‘spitzenkandidaten’.

“Some competencies should be given back to member states,” he added.

The friends of Orbán

Both Fidanza and Campomenosi see Hungarian Prime Minister Viktor Orbán as a friend of their political parties.

Fidanza believes that the EU’s allegations regarding the rule of law violations in the country are exaggerated,  confirming the good relations between the Hungarian prime minister and Fratelli d’Italia’s leader.

Campomenosi described the EU approach towards Hungary and Poland as “sickening”, and said that certain accusations of rule of law violations were “unjustified”.

“Relations with Orbán are excellent. EU’s behaviour against Hungary reinforced his consensus in the country, as elections’ results in Hungary have shown.”

“If these parties really violated people’s rights, they would never behave this way towards Ukrainian refugees,” he added.

A voice from the Democratic Party

The head of the Democratic Party delegation in the European Parliament, Brando Benifei, described the right-wing coalition as “a mess” as they are divided in Italy with Fratelli d’Italia in the opposition and the League and Forza Italia in the government coalition “with important ministries.”

Benifei believes it would be a “problem for Italy” if they ruled the country, as “they do not have a clear position towards the EU.”

The Democratic Party MEP explains that now the public opinion understood the need for a “stronger and united Europe” to face challenges such as “pandemic, climate change and now the war at our doors,” right-wing parties are trying to change their political discourse, after “they feed their voters for years with anti-EU propaganda.”