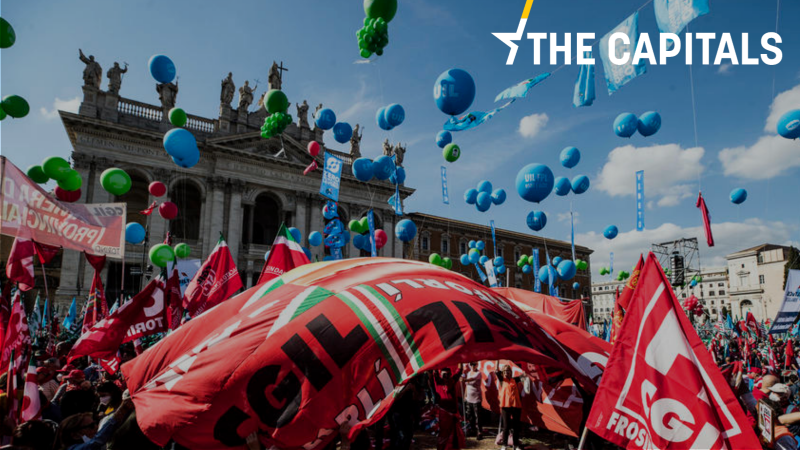 Approximately 100,000 people rallied in Rome on Saturday (16 October) in solidarity with CGIL, Italy’s largest trade union. On 9 October it was attacked by neo-fascist militants. Italy’s right political forces did not attend.

“Faced with such a serious and unprecedented fact in the recent history of our country, it would have been reasonable to give a unanimous response”, he said, talking about the attack on CGIL’s headquarters that sparked the antifascist protest on Saturday.

Centre-right and far-right parties defended their absence by saying that the protest was partisan. Former Interior Minister Matteo Salvini complained about the rally, accusing the left of holding a political demonstration in Rome the day before the second round of voting for mayor of the city on purpose.

“A party demonstration on Saturday before the vote is illegal”, said Salvini, adding that “fascism and communism have been archived by history. I am touring Italy, and I do not see fascist or Nazi dangers”.

Brothers of Italy leader Giorgia Meloni – whose party is currently the first preference among Italians according to the recent polls, closely folllowed by Salvini’s League – attributed her absence to the fact that some protesters were carrying Soviet Union flags.

“In a demonstration against fascism and extremism, people are waving the flag of the Soviet Union, one of the bloodiest regimes in the history of mankind. Hurrah!”, she tweeted.

Both Brothers of Italy and the League have recently been hit by accusations of neo-fascist leanings among their ranks after a journalistic investigation showed some of their candidates giving the fascist salute and citing Mussolini.