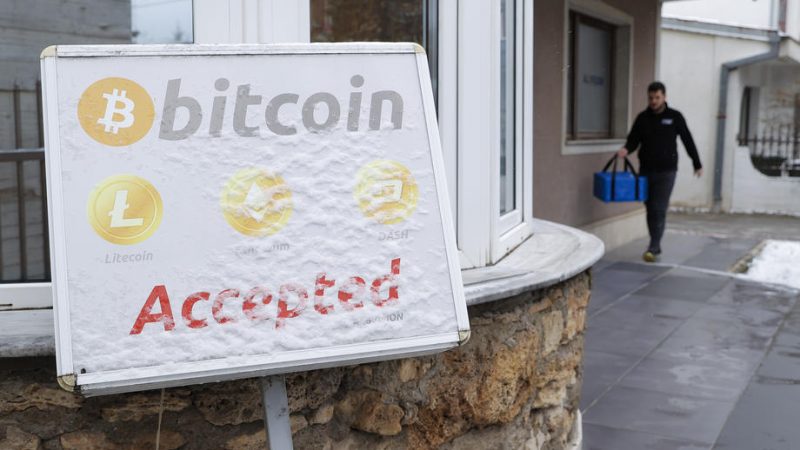 A bitcoin sign is placed in front of a crypto exchange office in Pristina, Kosovo, 10 January 2022. Kosovo's government has banned cryptocurrency mining as emergency measure imposed on 24 December 2021 to restrict the energy supply, valid for a maximum of 60 days. [EPA-EFE/VALDRIN XHEMAJ]

Following Kosovo’s ban on cryptocurrency mining, authorities are cracking down on those who still have the equipment in their possession, including those in the Serb-majority north who do not pay for electricity.

The ban was enforced to respond to the ongoing energy crisis that has seen scheduled blackouts across the country to save power.

On 7 January, police seized hundreds of cryptocurrency mining machines in the north, a region predominantly inhabited by ethnic Serbs. The seizures occurred amid ongoing tensions between the Serb-majority area and the ethnic Albanian government.

A total of 272 devices used for mining bitcoin were seized by the authorities, according to a police statement. One person was arrested, and no further incidents were reported.

Cryptocurrency mining is where computers solve complex algorithms in return for bitcoin. According to Finance Minister Hekruan Murati, the equipment seized by the police uses as much energy in one month as 500 homes, with an electricity bill of as much as €120,000.

“We cannot allow the illegal enrichment of some, at the expense of taxpayers,” he added.

The situation becomes more complex when you consider that Serbs living in the north’s four municipalities have not paid for electricity since the Kosovo-Serbia war, leading to Kosovo’s independence.

Under the agreement, Pristina foots the bill for electricity for these areas for €12 million a year. In November, Kosovo’s energy network operator KOSSTT announced it would stop supplying Serb-majority municipalities with free electricity but it is not clear when this will happen.

Police also undertook operations in other parts of the country, leading to the seizure of 70 pieces of equipment. The cryptocurrency mining ban comes just a month after Kosovo drafted a law on cryptocurrency, which was due to be adopted by the end of 2021. The regulation is still pending.