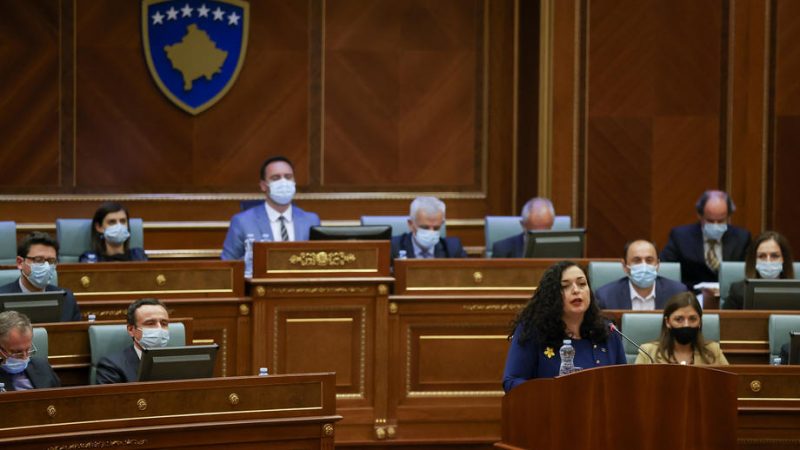 Kosovo’s parliament passed a resolution against allowing a Serbian constitutional referendum to take place in Kosovo, despite pressure from the EU to allow it. [EPA-EFE/VALDRIN XHEMAJ]

Kosovo’s parliament passed a resolution against allowing a Serbian constitutional referendum to take place in Kosovo, despite pressure from the EU to allow it.

The eight-point resolution states that the referendum violates Kosovo’s sovereignty and is against the country’s constitution. It also reiterates that dual citizens are free to vote, but declares that opening voting centres to hold another country’s referendum in Kosovo territory is against Kosovo’s constitution and international law.

The resolution also emphasises that Kosovo is against Serbia’s continuous attempts to instrumentalise and misuse Kosovo citizens of Serbian descent to further its hostile politics against Kosovo.

On Sunday (16 January), Serbia held a constitutional referendum to change how its judges and prosecutors are elected. The Serbian government had requested that voting centers be opened in Kosovo so that registered voters can participate in Serbia’s referendum.

EU High Representative Josep Borrell and the international community have called on Kosovo to allow these voting centres to be opened and to enable OSCE to collect the votes.

The government of Prime Minister Albin Kurti refused these demands, stating that allowing the referendum to take place in Kosovo’s territory would violate its sovereignty. Kurti and Deputy Foreign Minister Kreshnik Ahmeti have reiterated that dual citizens can vote by mail or through the Serbian Liaison office in Prishtina. They prevented polling stations from being set up and sent back ballots to Serbia.

Serbian President Aleksandar Vucic said that Pristina’s ban on Serbs in Kosovo voting in a referendum would have far-reaching consequences, pledging that Serbia “stands with her people.”
He said there was a “deeper issue,” and that was the opinion of some of the countries of the Quint (the U.S., UK, Germany, Italy and France).
“I guess they take us for idiots — and when I say that I mean it in the true sense of the word,” Vucic said, adding that they were capable of urging ethnic Albanians to respect democracy and allow Serbs to vote, but if the ethnic Albanians refused, there would not be a single word of protest, alone an action or sanction.
According to him, if Milorad Dodik, the Serb member of the Presidency of Bosnia and Herzegovina, or Belgrade had done anything similar, to anyone in any way and at any time, “They would have been penalised and labelled bad guy troublemakers.”

Kosovo Serbs held a protest in the Serb-dominated north of the country but no incidents were reported.