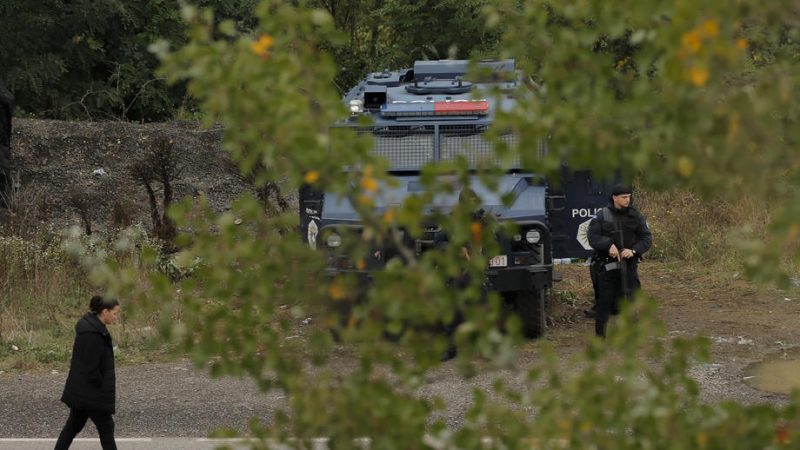 None of the police officers inside the car were injured, according to the media release by the Kosovo police. Police presence in the area has increased, and investigations are ongoing. [EPA-EFE/VALDRIN XHEMAJ]

A Kosovo border police car was ambushed with firearms on Tuesday morning near Zubin Potok, close to the border with Serbia, the latest in a string of attacks in the last 10 days.

None of the police officers inside the car were injured, according to the media release by the Kosovo police. Police presence in the area has increased, and investigations are ongoing.

On Tuesday (26 April), the Belgrade-controlled Lista Srpska political party of Kosovo Serbs condemned the attack in the Serb-majority town of Zubin Potok.

“This incident aims to destabilise the situation, but it is also an attempt to present Serbs as thugs, which is not true,” the party stated in a press release while calling on Kosovo Serbs “not to fall prey to provocations”.

This is the fifth attack in ten days against the Kosovo border police. The previous ones included a hand grenade thrown at police, an assault rifle attack, road devices to damage car tires, and rocks thrown at police cars.

Prime Minister Albin Kurti stated that the previous attacks originated in Serbia, and the government called them “terrorist acts”. “Serbia’s aim at this point is not to attack Kosovo but to destabilise it,” said Interior Minister Xhelal Svecla.

The latest attack comes amid a visit to Kosovo and Serbia by US Assistant State Secretary Karen Donfried, who is pushing for the two countries to reengage in a dialogue aimed at mutual recognition.