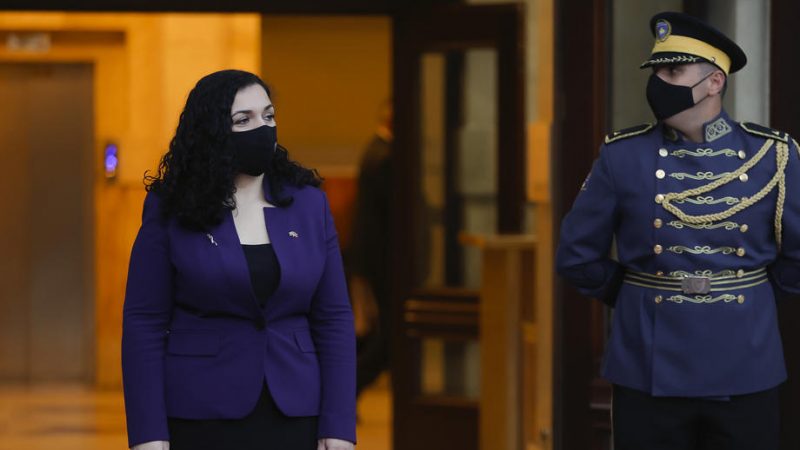 The Open Balkan initiative is between the governments of Albania, Serbia and North Macedonia and provides for the free movement of people and goods. But critics have queried whether it is still tenable following Russia’s invasion of Ukraine and considering Vučić’s refusal to align with EU sanctions or publicly condemn Moscow. [EPA-EFE/VALDRIN XHEMAJ]

The Open Balkan initiative is between the governments of Albania, Serbia and North Macedonia and provides for the free movement of people and goods. But critics have queried whether it is still tenable following Russia’s invasion of Ukraine and considering Vučić’s refusal to align with EU sanctions or publicly condemn Moscow.

Osmani said that in this context and also because Serbia does not accept Kosovo’s sovereignty, Rama should not be a part of the initiative.

“I do not know why Albania would accept such an initiative where Kosovo will not be treated as a sovereign state and where an important role is played by Vucic, the leader of a state that on a daily basis tries to destabilise Kosovo and violate its sovereignty,” said Osmani.

“It is incomprehensible to me why such a thing is supported by Albania…why they continue to support such an initiative is a question that should be asked to Albania,” she added.

Kosovo has not joined the initiative as Serbia refuses to recognise its independence, declared in 2008 after the Serbia-Kosovo war of 1998-1999. This, combined with Serbia’s lobbying, means Kosovo has struggled to join various institutions like UNESCO, NATO, and the EU.

“Unfortunately, a mentality of the ’90s continues where Serbia continues to see other countries in the region, in particular, the Republic of Kosovo, Montenegro, but also Bosnia and Herzegovina as temporary states,” said Osmani.

She condemned Serbia for preventing Kosovo Serb citizens from voting in Kosovo during the recent elections. Osmani said Belgrade had been offered three options but had rejected them all.

“In fact, it was Serbia that prevented Serbs from voting. Kosovo institutions have given the right to Serbian citizens to vote either through the liaison office, post office or by signing a bilateral agreement that would fully respect the best international practices in this regard. So there were three options, none of which was accepted by Serbia,” said Osmani.

By wanting to open polling offices in Kosovo, Osmani said this aimed to undermine Kosovo’s sovereignty. Osmani confirmed Kosovo is in the process of applying for membership in the Council of Europe.

In terms of NATO membership, she said it remains a strategic goal, but four nations still do not recognise the country.

“NATO membership is a much more complicated process as it requires a unanimous vote and a unanimous decision. There are still four countries in NATO that have not recognised Kosovo. Our steps are to make sure we meet the criteria for membership in this organisation,” she said.