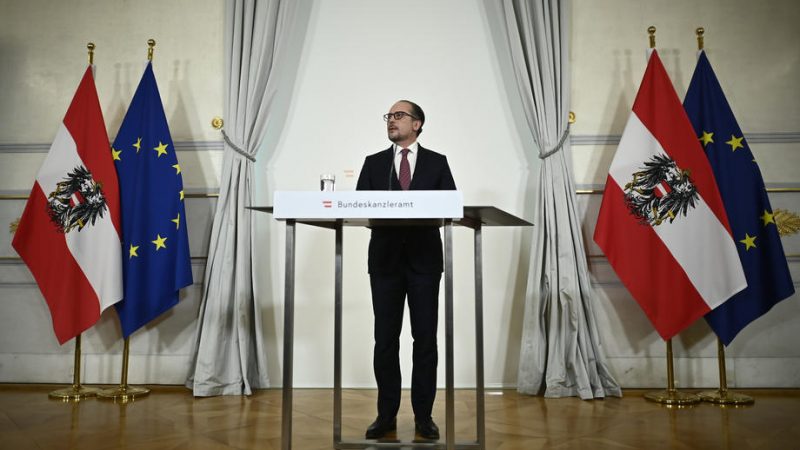 “Behind us are difficult and turbulent days,” Schallenberg said in his inaugural speech, adding that, “what we need right now, is responsibility and stability.” [EPA-EFE / CHRISTIAN BRUNA]

Former Foreign Minister Alexander Schallenberg was sworn in as Chancellor of Austria on Monday. He said that he wants to continue the “successful path” of former Chancellor Sebastian Kurz, who resigned on Saturday due to a looming government crisis and corruption allegations.

“Behind us are difficult and turbulent days,” Schallenberg said in his inaugural speech, adding that, “what we need right now, is responsibility and stability.”

Schallenberg also referred to his future collaboration with Kurz.

“I will of course work very closely with Sebastian Kurz. Everything else would be absurd in terms of democracy,” he said. He also emphasised that he thinks that the accusations against Kurz are “wrong” and that time will prove that there is no truth to them.

The opposition criticised Schallenberg for painting a positive picture for Kurz. Federal Manager of the Social Democrats, Christian Deutsch, said that it was “mind-boggling” that Schallenberg claimed Kurz’ innocence without any proof. The Federal Chairwoman of the liberal NEOS, Beate Meinl-Reisinger, added that this “doesn’t sound like a political reset.”

Kurz himself will continue to play a crucial role in Austria.  He will retain his function as party leader and is set to be sworn in as faction leader of the conservative ÖVP on Tuesday. This led the opposition to accuse him of being a ‘shadow-chancellor’ who will operate behind the scenes and will be pulling the strings.

Kurz himself tried to refute these accusations. “I am not a shadow chancellor,“ he said in a statement. “I will work at full speed in the coming days to ensure an orderly handover,” he continued.