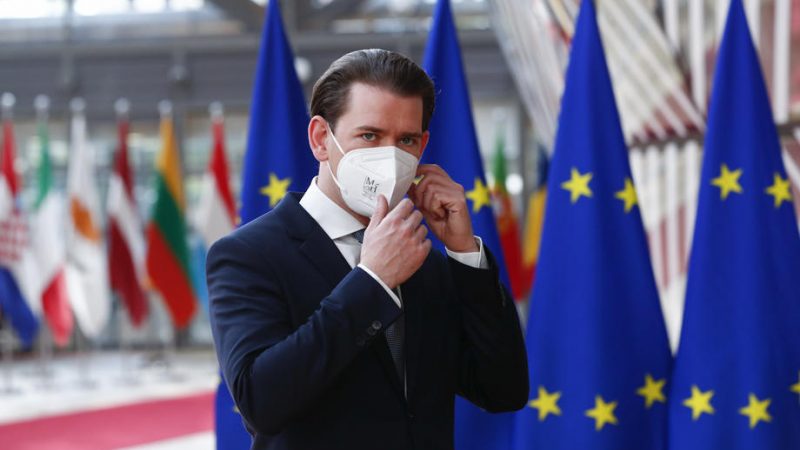 Austria's Chancellor Sebastian Kurz adjusts his mask as he arrives for a face-to-face EU summit in Brussels, Belgium, 25 May 2021. [EPA-EFE/JOHANNA GERON / POOL]

Chancellor Sebastian Kurz will welcome the Balkan heads of state of Serbia, Kosovo, Montenegro, Bosnia-Herzegovina and North Macedonia as well as the EU Special representative for the Belgrade-Pristina dialogue at a summit in Vienna on Friday (18 June) to discuss the repatriation of illegal migrants and the prospect of EU accession.

Western Balkan countries are committed to the “common fight against illegal migration,” Kurz said ahead of the summit in Vienna.

The meeting with Western Balkan leaders comes at a time when Austria is showing concern about the end of the pandemic possibly leading to a rise in illegal migration. Interior Minister Karl Nehammer has thus already launched an initiative in April to work on “repatriation plans” for illegal migrants with the Western Balkan governments.

“We have developed a comprehensive repatriation plan and support the Balkan states in organising repatriations,” Nehammer told Vienna Online, adding that “a majority of the people who currently reside in these countries have no right for asylum in Europe anyway.”

Kurz will also discuss EU accession with the Western Balkan heads of state, stating that they have “his full support.”

“The EU will only be complete if all of the Western Balkan states have joined,” Kurz said, noting that the EU should focus more on the EU accession process. (Oliver Noyan | EURACTIV.de)