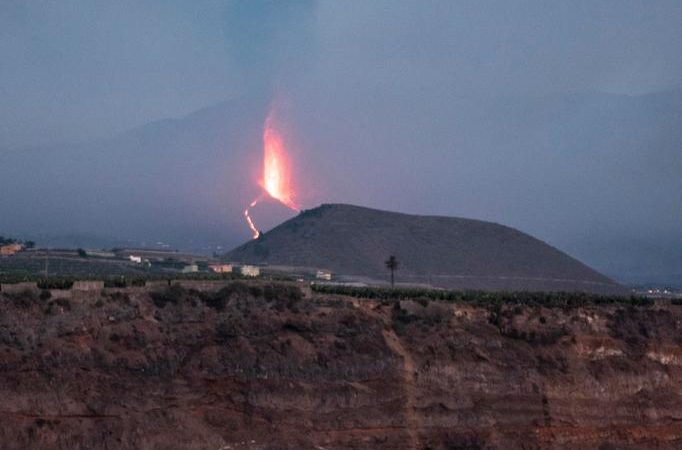 This was not the first break in eruptions since the volcano first erupted eight days ago, forcing some 6,000 people to evacuate their homes. [EPA-EFE/MIGUEL CALERO]

A plume of smoke was seen at 11.00 am (10.00 GMT), some two and half hours after the column that scattered ash all over the island disappeared following a night of continuous explosions.

This was not the first break in eruptions since the volcano first erupted eight days ago, forcing some 6,000 people to evacuate their homes.

Small plumes of smoke were seen from Tazacorte port along the stream of lava that destroyed the town of Todoque, as it made its way toward the ocean.

On Sunday, volcanic emergency experts said that it was only a matter of hours before the lava flowed into the sea and ordered all residents in nearby neighbourhoods to stay inside their homes to avoid the fumes, EFE reported.

Involcan warned that the toxic steam resulting from when the molten rock comes into contact with the ocean poses a danger to local residents.

Plumes of water vapour loaded with hydrochloric acid containing tiny particles of volcanic glass will billow out once the lava, with a temperature reaching over 1,000 degrees celsius meets the ocean water, according to Involcan.

However, this toxic steam is not as powerful as the jet of acidic gases emitted directly from the volcano’s crater, which can reach a height of five kilometres in some cases.

Since record-keeping began after the conquest of the Canaries in the 15th century, La Palma Island has been the site of seven of the 16 volcanic eruptions the archipelago has experienced.