Le Pen lays out her vision of Europe 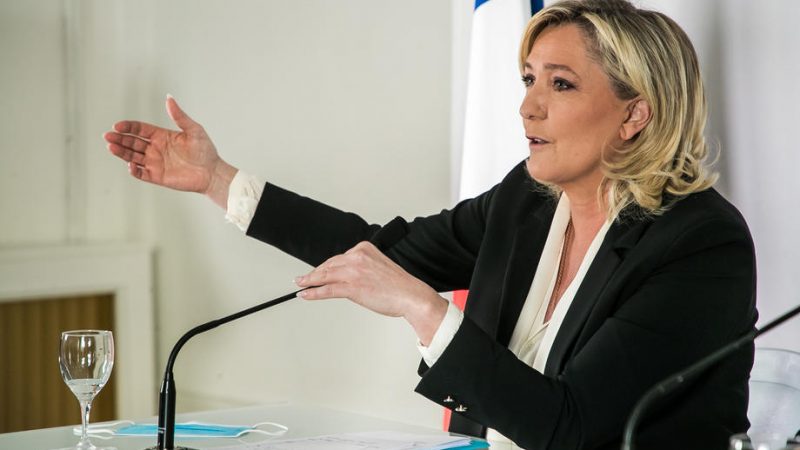 Marine Le Pen, leader of the far-right Rassemblement National party, detailed her idea for a “Europe of nations”, which she said contradicts the “worrying” project of President Emmanuel Macron.

Le Pen wants to build a “European alliance of nations“, the far-right leader explained at her press conference on the French presidency on Tuesday. An ambition “at the antithesis of the one defended by Emmanuel Macron. […] The one of the Europeanists, forgetting the peoples and dominating the nations,” she added.

Le Pen took aim at the EU over its border policy. According to her, these are “obstacles to trade and contravene the now religious dogma of freedom of movement” because of “the globalist and ‘un-frontierist’ ideology” and “the dogma of Schengen”.

She also criticised Macron – whom she called “the factotum of Mrs Merkel” – accusing him of wanting to “mutualise our defence apparatus, in particular with the Germans, from whom everything separates us.” She also accused him of promoting a common EU defence strategy.

However, the far-right leader did recognise the need for “cooperation between European nations” where interests converge.

Le Pen accused Brussels of wanting to “erase everything that […] could remind us of our roots, our identities” and “impose its laws over the constitutions of the States”.

The far-right leader added that she “salutes the act of resistance” of the Polish and Hungarian governments, who “refused to submit to Brussels diktats”. According to her, “there will be no European sovereignty because there are no European people”.

If the French were to support her candidacy, Le Pen would not only save “France from organised deconstruction but Europe from a programmed [demographic] submersion”, she added.