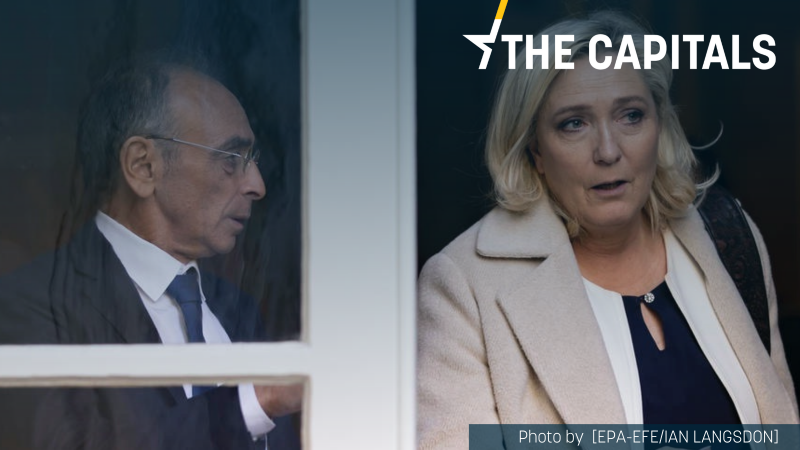 Marine Le Pen's Rassemblement National is still refusing to accept fellow far-right leader Éric Zemmour's call for a "union of the rights" ahead of the legislative elections in June. [EPA-EFE/IAN LANGSDON]

The party aims to gather “voters who want to participate” in Le Pen’s “common project” rather than commit to agreements between parties, the spokesperson added.

“This is the eighth time that the name of Le Pen has been defeated […] I have seen this defeat coming for years,” he said, referring to the presidential elections she and her father Jean-Marie Le Pen contested.

However, Zemmour insisted on his call to unite the far-right ahead of the June legislative elections. Zemmour scored 7.07% in the first election round on 10 April, getting 2,485,000 votes.

In response to his call, Rassemblement National ruled out any possibility of an alliance with his party, Reconquête.

Sébastien Chenu, a Rassemblement National member close to Le Pen, told BFM-TV that “Zemmour is for the union of the right, while we are for a great patriotic union that goes beyond the left and the right because these concepts of left and right do not work.”

EURACTIV understands that this language is part of Le Pen’s party strategy to avoid being labelled as “extreme right”, while creating a new divide between “nationals” and those represented by re-elected President Emmanuel Macron, the so-called “globalists”.

However, Zemmour’s team now wants to convince Le Pen’s party to “put an end to the ‘cordon sanitaire’ that has sterilised the chances of the national camp for 40 years.”

With legislative elections around the corner, an agreement between the two parties could help both parties secure seats in parliament, even if the prospect of forming a majority remains exceptionally slim.

Macron won the presidential election by a landslide with 58,8% of the votes despite turnout being slightly lower than in the first round at 72%. He is the first president to be re-elected since the five-year term was introduced in 2002.

According to Tara Varma, head of the European Council on Foreign Relations (ECFR) think-tank in Paris, Macron’s biggest challenge will be creating cohesion in a highly fragmented country where the far-right gets 41% of the vote.

“Le Pen will do her best to capitalise on her result for the June parliamentary elections,” she told EURACTIV.

The analyst said the political reconfiguration that started five years ago will now be completed as new alliances are bound to emerge.

“The far left led by Mélenchon and La France Insoumise (LFI) is ambitioning to form a large left-wing union with the Greens (EELV), the Communist Party (PCF) and the Socialist Party (PS). On the other side of the political spectrum, there is more ambiguity: part of the right has already joined Macron, but the other part will have to decide whether to join Eric Zemmour or form another large mainstream right-wing party,” she noted.

Commenting on the French vote, a senior Social Democrat, German MEP Udo Bullmann, told EURACTIV Germany that the result is a “serious reminder” to the French president that “France now needs a social and ecological renewal” as France is facing “deep social divides.”