Leader of Northern Ireland’s DUP Poots to step down 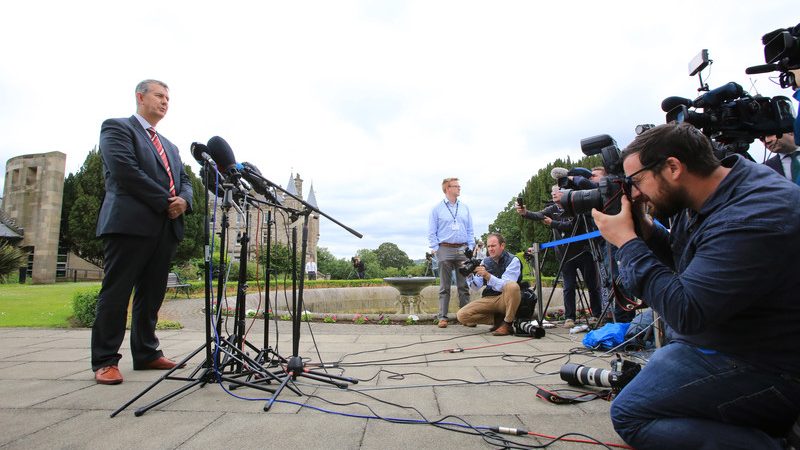 The leader of Northern Ireland’s Democratic Unionist Party Edwin Poots is to step down just three weeks after taking power, he said in a statement.

“I have asked the party Chairman to commence an electoral process within the party to allow for a new leader of the Democratic Unionist Party to be elected,” Poots said.

His resignation casts into doubt the position of Northern Irish First Minister Paul Givan, who was installed in office at midday on Thursday (17 June) as the DUP was holding crisis talks.

It also raises the prospect of Northern Ireland’s power-sharing executive collapsing into a snap election, in the latest sign that Brexit has upended the political landscape of the deeply divided UK province.

Senior DUP figures have gathered for a meeting at party headquarters in Belfast, amid anger in the party that Northern Secretary Brandon Lewis announced early on Thursday morning that a compromise had been reached over the introduction of Irish language legislation, as reported by the Irish Times.

The DUP leader went ahead with Givan’s nomination despite the opposition of a large majority of party representatives at a meeting on Thursday morning. It is understood there were heated exchanges and a significant majority voted against the nomination going ahead in a ballot which was held after Poots and Givan had left to take part in the nomination process in the assembly chamber.

Asked if he had confidence in Poots as DUP leader, Wilson said “my view is that any leader, if they want to have confidence, should bring people along with them, and a leader who acts without the support of even a marginal majority has to live with the consequences of that”. (Paula Kenny | EURACTIV.com)