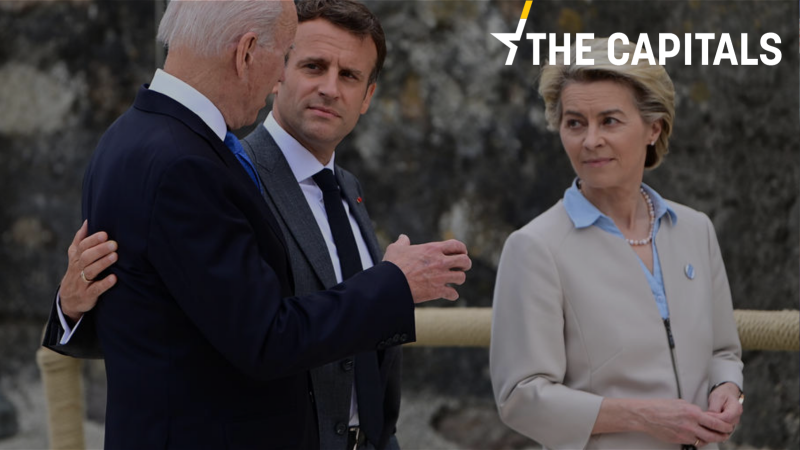 After G7 and NATO summit made strong statements towards Beijing, EU leaders together with Biden will pledge "to renew our transatlantic partnership, set a Joint Transatlantic Agenda for the post-pandemic era, and commit to regular dialogue to take stock of progress", according to the draft document. [EPA-EFE/NEIL HALL/INTERNATIONAL POOL]

Brussels and Washington aim to renew ties during a joint summit with US President Joe Biden on Tuesday (15 June), but – from the tariffs dispute to China – the transatlantic alliance still has areas of disagreement. EURACTIV has seen the draft summit conclusions. Here’s five areas of interest.

After the G7 and NATO summits made strong statements towards Beijing in recent days, EU leaders together with Biden are to pledge “to renew our transatlantic partnership, set a Joint Transatlantic Agenda for the post-pandemic era, and commit to regular dialogue to take stock of progress”, according to the draft document.

Leaders are set to pledge to “closely consult and cooperate” on the “respective similar multi-faceted approaches to China, which include elements of cooperation, competition, and systemic rivalry”, which is meant to include also human rights abuse concerns.

“We intend also to coordinate on our constructive engagement with China on issues such as climate change and non-proliferation, and on certain regional issues,” they will state, while at the same time stressing the importance of the UN Convention on the Law of the Sea (UNCLOS) and regional stability across the South China Sea.

But relations have soured over the controversial EU-China investment agreements, which Brussels had agreed “in principle” upon with Beijing, despite the Americans asking Europeans to wait for Biden to take office in January to consult on future ties with Beijing.

It might help the summit mood, that after tit-for-tat sanctions between Europe and China and a spat over alleged human rights violations, the implementation of the pact, strongly backed by Germany, is currently suspended.

“We stand united in our principled approach towards Russia and we are ready to respond decisively to its repeating pattern of negative behaviour and harmful activities,” leaders will state, adding that the EU and US are “determined” to continue to stand in support of the sovereignty, independence, and territorial integrity of the EU’s eastern partners.

For that, and to coordinate policies and actions, leaders will pledge “to establish an EU-US high-level dialogue on Russia”, without however giving details what this would entail in practice.

The conclusions make no mention of the controversial Nord Stream 2 gas pipeline, led by Germany. In a gesture towards Berlin, the US announced at the end of May that it was dropping sanctions against the main company involved, Nord Stream 2 AG, a subsidiary of the Russian giant Gazprom.

Question is whether this will satisfy Eastern Europeans.

“We commit to make every effort possible to find comprehensive and durable solutions to our trade disputes, and to avoid further retaliatory measures burdening transatlantic trade,“ leaders will likely state. The draft shows a row of language proposals and counterproposals from both sides and EU officials said this might be one of the sticking points during the meeting.

The Airbus-Boeing showdown at the World Trade Organisation dates back 17 years, with both sides accusing the other of unfairly subsiding their aviation champions. Just weeks after Biden’s inauguration, the two blocs announced a truce and suspended the tit-for-tat duties in hopes of reaching an agreement by 11 July.

At the same time, the EU is still trying to get a commitment from the US to settle their dispute on steel and aluminium that was provoked by former US president Donald Trump in 2018 in the first of several trade attacks against the Europeans, for which resolution talks have been underway since May.

Both sides are also set to agree on the touted new high-level EU-US Trade and Technology Council (TTC) to design standards for emerging technology, address the responsibility of online platforms and reign in the growing power of Big Tech.

“The cooperation and exchanges of the TTC will be without prejudice to the regulatory autonomy of the US and EU and will respect the different legal systems,” the draft conclusions read.

As EURACTIV reported on Friday, an interesting caveat is Washington’s turn towards European defence.

According to the draft conclusions, the EU and the US are considering a deal to further strengthen EU-US defence cooperation, which could entail the US starting to cooperate with the European Defence Agency (EDA) on more military projects than the one recently sealed and “beginning discussions as soon as possible” on the matter. (Alexandra Brzozowski, EURACTIV.com / Aneta Zachová, EURACTIV.cz)