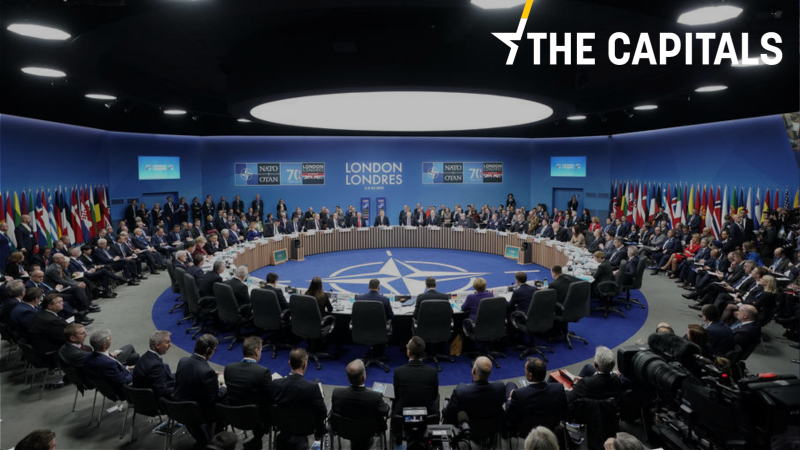 How to respond to an assertive Russia and China? What to do about 'rogue' member Turkey? How to deepen EU-NATO relations? What to do about climate change? EURACTIV has seen a draft summit communiqué. [EPA-EFE/WILL OLIVER]

**This article has been updated with a specification on Afghanistan.

NATO leaders will gather in Brussels for a summit on Monday (14 June) to re-orient the alliance after its identity crisis over the past years. The meeting is sandwiched between the G7 summit in Britain and an EU–US summit.

The questions are significant: How to respond to an assertive Russia and China? What to do about rogue member Turkey? How to deepen EU-NATO relations? What to do about climate change? EURACTIV has seen a draft summit communiqué. Here’s what we know.

Monday’s summit is set to adopt a series of documents: A traditional, this time roughly 40-page joint summit communiqué, plus a NATO 2030 reform agenda. In a separate document, leaders will agree on how to boost NATO’s resilience to emerging threats, and on a new Climate Change and Security Action Plan. NATO’s cyber defence policy will also be reviewed.

As EURACTIV reported on Friday, Biden’s top political priority, China, will have much stronger language than it ever had before, with leaders set to stress “growing divergence between Beijing’s coercive policies and our values”.

Diplomatic sources told EURACTIV that while Washington was pushing for strong wording, Europeans were more reluctant, labelling Russia as “threat” and China rather as “challenge”, thus avoiding putting Moscow and Beijing into the same basket.

However, 14 mostly ex-Soviet and Balkan members, which are closer to the US position, align with Washington on China policy as they believe that only the US could guarantee their security toward aggressive Russia, the diplomatic sources said.

On Russia, NATO leaders are set to acknowledge that Moscow, “in addition to its military activities, has also demonstrated a pattern of hybrid actions against NATO allies and partners, including through proxies”.

The leaders’ statement is likely to include a reference to increased consultations between allies and work towards higher accountability when it comes to internal conflicts.

“We commit to reinforce consultations when the security or stability of an ally is threatened or when our fundamental values and principles are at risk,” it will likely say, without specifying an internal or external threat.

The passage does not specify whether those refer to external or internal threats, which would basically mean both. It is worth keeping in mind escalating tensions between Turkey and Greece.

A further paragraph is set to call on all foreign forces to pull out of Libya, to which Ankara has raised objections as it wants to keep troops in the country, diplomatic sources said. While France has opposed such a scenario, the US side has remained ambiguous, seemingly not to displease Turkey.

NATO leaders will also emphasise a desire to deepen dialogue and practical cooperation with alliance partners, including the EU and those in the Indo-Pacific (Australia, Japan, New Zealand, and South Korea).

According to diplomatic sources, Turkey has been trying to play down as much as possible the paragraph asking for deepening the EU-NATO relations over relations with Cyprus, which is an EU member, but not a NATO member.

Leaders will reaffirm their commitment to NATO’s Open Door Policy, a path to membership “remains open to all European democracies which share our values and meet the necessary responsibilities and obligations”.

NATO members are also set to say they “have no intention to deploy land-based missiles in Europe”.

If the passage remains in the document, the move is seen as a possible way to ease tensions with Russia ahead of a “strategic stability” dialogue at Wednesday’s US-Russia summit in Geneva, where arms control will be a subject.

The draft text, however, also stresses that “as long as nuclear weapons exist, NATO will remain a nuclear alliance”.

“Withdrawing does not mean ending our relationship with Afghanistan” and “open a new chapter” which will still involve providing financial support and training, NATO leaders will state, after allegations by European members that the Biden administration’s failed to sufficiently consult with allies ahead of the announcement.

On the eve of the summit, NATO Secretary-General Jens Stoltenberg stressed that consultations between allies had been held at different levels on the withdrawal of troops and how support can be provided. “We actually had consultations on these issues over the last month, until we made a decision,” Stoltenberg said ahead of the summit.

NATO leaders are expected to set the ambition for NATO to adapt to the impact of climate change on security, agree to reduce greenhouse gases from military activities and installations in line with national commitments under the Paris Agreement.

Speaking at a summit side-event in the morning, Stoltenberg pointed towards the fact that in the current ‘Strategic Concept’, climate change had not been sufficiently mentioned, and he expects a “clear commitment” from allies to “significantly reduce military emissions” and “contribute to the goal of Net Zero”.

However, NATO diplomats remain sceptical. “We cannot imagine having F-35 flying with hydrogen,” a NATO diplomat told EURACTIV, adding that the ambition might be more related to modernising some bigger allies’ armies, which still has highly polluting equipment from the Soviet era. Those members, such as Poland or Turkey, are likely to ask for additional money to go “slightly green”, because they claim they cannot afford it, diplomatic sources said.