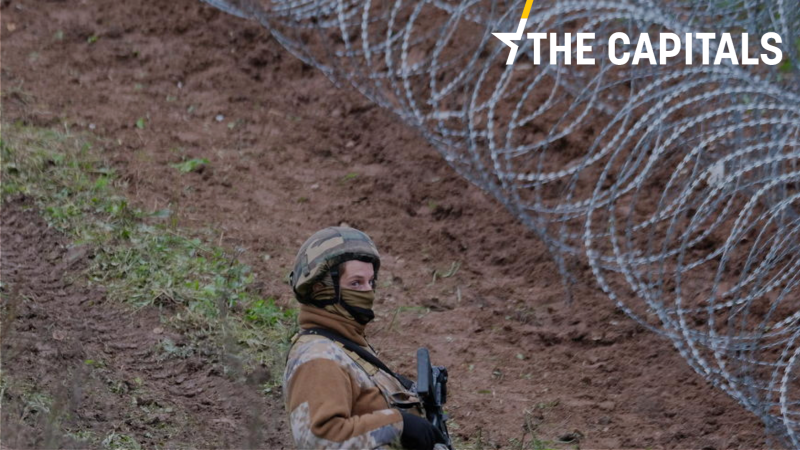 Asked by EURACTIV, EU Commission Vice-President Margaritis Schinas said on Wednesday that not only Lithuania, but also other member states have similar ideas. [EPA-EFE/VALDA KALNINA]

Faced with a stalemate in talks over a new EU migration pact, several member states have tabled a proposal to legalise pushbacks. Considering that no joint EU response on migration is expected before the French elections in April 2022, the EU will be walking on a tightrope.

Inspired by Turkish President Recep Tayyip Erdoğan, Belarus has been using migrants as a weapon in response to EU sanctions for months.

Thousands of migrants fly to Belarus and are then pushed across the Polish, Lithuanian, and Latvian borders by local authorities.

Lithuania has proposed changing the existing EU migration rules to legalise pushbacks of irregular migrants when an extreme situation is declared in a country.

“In such situations when there’s an extreme situation, and illegal migrants are being used as an instrument to put pressure on countries, countries have the right to make such decisions [like] the ones we have made in our national law, i.e. to prevent illegal entrance,” Lithuanian Interior Minister Agnė Bilotaitė said.

Asked by EURACTIV, EU Commission Vice-President Margaritis Schinas said on Wednesday that not just Lithuania but other member states also have similar ideas.

“The root of this claim is, of course, that it’s totally different to deal with asylum requests made by people who can come to the border and do it individually […] And do the same thing for thousands of desperate people who are put in buses and very often in police cars and are pushed or escorted to the border by instrumentalisers,” he said.

“There is a difference between those two cases, and we need to address it,” he said, adding that the answer to all these issues is the Commission’s proposed Migration Pact.

Previously, an EU spokesperson firmly rejected attempts to instrumentalise people for political purposes but failed to give a clear answer on the EU position on the issue.

“We cannot accept any attempts by third countries to incite or acquiesce in irregular migration towards the European Union. What is needed here is both orderly, firm border management and full respect for migrants’ fundamental rights, taking due account of the specific needs of vulnerable people,” the EU official told EURACTIV.

“We are working closely with the Lithuanian authorities to support them in the effective border management of the external border, in line with EU law, in full respect of people’s fundamental rights and ensuring effective access to the asylum procedure,” the spokesperson added.

Meanwhile, migrants and small children – who on Monday were transported to Michałowo – were escorted back to the Belarussian border on Wednesday, Katarzyna Zdanowicz, a spokesperson of the Podlaskie Border Guards has confirmed, TVN24 reported.

“We want to stay here and become Polish citizens, but we are not allowed. When we go to Belarus, they beat us there, they take our money and send us back to Poland. These children can’t walk. They will die in the forest,” Suat, one of the migrants from Turkey told Gazeta Wyborcza.

The Polish Border Guard reported it had prevented 200 to 500 illegal border-crossing attempts each day. Since the start of September, about 5,000 attempts have been thwarted.

But many migrants are managing to escape the Polish Border Guards, Oko.press reported.

Each day, about 500 people are landing in Minsk and are promised that they will be transported to Germany, Oko.press added. If and once they successfully cross the border into Poland, it takes them only three days to arrive on the German border, compared to the 30 days it takes via the Balkan route.

The EU’s migration commissioner, Ylva Johansson, is set to arrive in Warsaw on Thursday to discuss the pushbacks and deaths of migrants on the Polish-Belarusian border and Frontex’s potential involvement in monitoring the situation. Johansson is scheduled to meet Polish Interior Minister Mariusz Kaminski.

Five people have so far been reported dead on the Polish-Belarussian border.