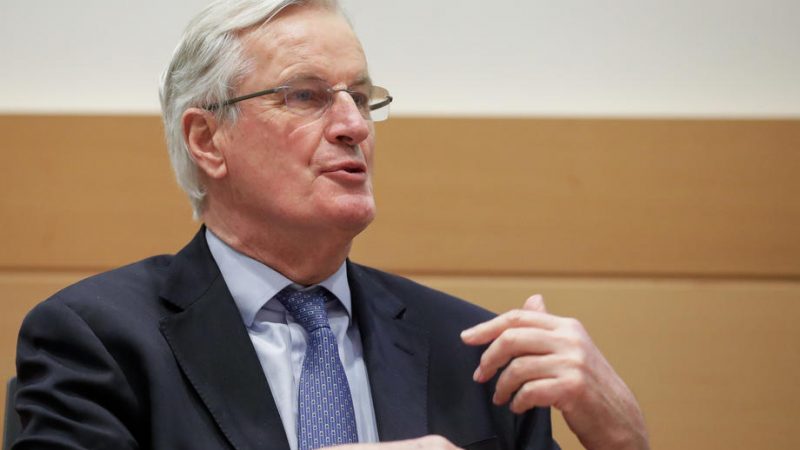 Six politicians are vying for the presidential nomination. They include Michel Barnier, who served as the European Commission’s Brexit negotiator, and Xavier Bertrand, who finally agreed to participate. [EPA-EFE / STEPHANIE LECOCQ]

The six nominees hoping to represent the right-wing Les Républicains in France’s presidential elections next April will publicly confront each other in November, news channel FranceInfo revealed on Wednesday (20 October).

The first televised debate is to take place on 8 November, followed by three more events on 14, 21 and 29 or 30 November. They precede the party members’ vote for the LR candidate, during a special party congress in early December, and which should result in the official designation of a candidate by 4 December.

“After ten years of internal fractures, Les Républicains are resolved to not watch France […] being downgraded in guilty silence”, the right-wing party states on its website.

“In 2022, the presidential election will have the merit of clarity for our fellow citizens. Between the empty promises of Emmanuel Macron and the fables of a defeatist extreme right, Les Républicains will embody the choice of the future of France,” it adds.

The party declares that “our movement has built a political project with strong proposals, applicable without delay and which will be able to meet the expectations of the French on many subjects: immigration, security, health, education, dependence, employment, purchasing power, environment…”.

Six politicians are vying for the presidential nomination. They include Michel Barnier, who served as the European Commission’s Brexit negotiator, and Xavier Bertrand, who finally agreed to participate in the LR pre-election after having left the party in 2017, as well as Eric Ciotti, Philippe Juvin, Denis Payre and Valérie Pécresse.