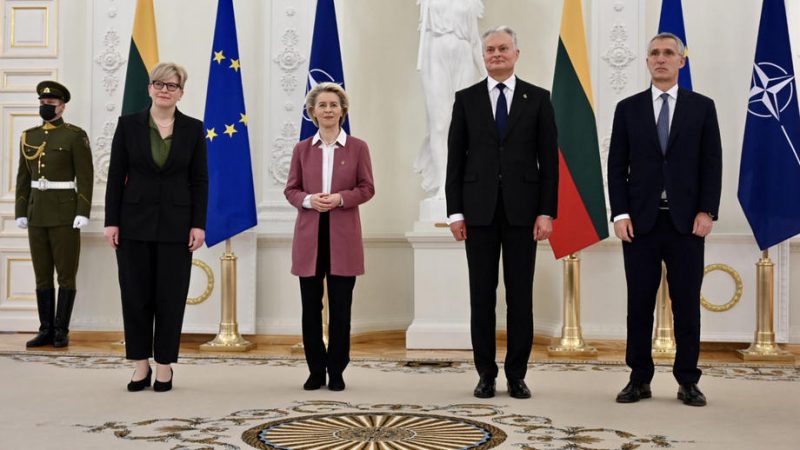 Lithuanian President Gitanas Nauseda said on Sunday (28 November) that the NATO military alliance needed to adjust its stance towards Belarus, whose military, he said, was becoming more integrated with Russian armed forces.

Nauseda told a news conference with NATO Secretary-General Jens Stoltenberg and European Commission President Ursula von der Leyen in Vilnius that he was worried by the “total military integration” of Belarus into Russian military structures.

“This brings new challenges to NATO, and NATO should accordingly adapt its plans, strategy and tactic, to be ready to respond,” he said.

Nauseda also said Belarus would keep testing the unity of the west after thousands of migrants arrived at the European Union’s eastern frontiers. Humanitarian agencies say at least 13 migrants have died at the Polish border after crossing from Belarus.

The EU says the crisis was engineered by Belarusian leader Alexander Lukashenko and is part of a “hybrid war” Minsk is waging in retaliation for EU sanctions imposed in response to Lukashenko’s crushing of protests against his disputed re-election last year.

“We can have no doubts that Lukashenko’s regime and the powers that support it will continue to test the western world’s unity and their ability to react and repel the hybrid attacks,” Nauseda said.

Von der Leyen said Lithuania had been responding in a “humane and firm way” to the crisis and the European Union continued to support it, with 200 million euros ($226.3 million)in EU funds to be given to Latvia, Lithuania and Poland for border control this year and next.

“We call on Russia to be transparent, to reduce tensions and to de-escalate. NATO remains vigilant. We stand ready to defend all allies,” he said.

NATO foreign ministers will meet in Latvia on Tuesday.