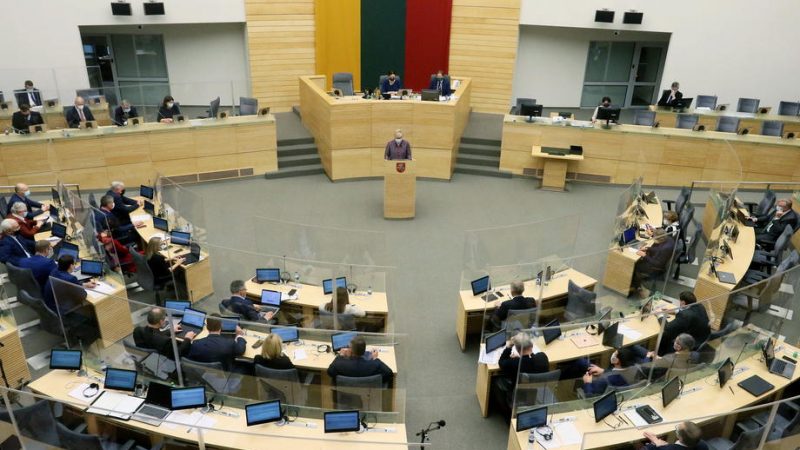 The initiative comes in reaction to a recent spike in irregular migration to Lithuania. [EPA-EFE/STR]

The initiative comes in reaction to a recent spike in irregular migration to Lithuania.

Vilnius officials have accused the Belarusian government of facilitating migrant smuggling in retaliation to the EU’s sanctions. They have called it a “hybrid attack” on the EU.

The Committee on National Security and Defence (NSGK) and the Committee on Foreign Affairs (URK) held a joint sitting on Wednesday to discuss the situation.

“The committees’ joint decision includes a provision on the need to propose to the Foreign Ministry to draft legal proposals at the European level for the existing rules, convention […] to be more flexible in response to the migration crisis, especially when a state is taking part in it,” Laurynas Kasčiūnas, the conservative chair of the NSGK, told reporters after the meeting.

He said that the current rules were “too liberal.”

Kasčiūnas suggested that the EU should narrow down the possibilities for asylum seekers to appeal asylum decisions and restrict migrants’ free movement.

On Tuesday, the Lithuanian parliament fast-tracked a package of laws restricting the rights of irregular migrants. Among other things, the legislation allows to keep asylum seekers in detention for up to six months and limits their right to appeal if their applications are rejected.

“If we don’t want to open up a transit route via Lithuania – which is important for the western countries which are the final destination for illegal migrants – more understanding is needed in Europe that free movement restriction is a normal practice to deter migration,” Kasčiūnas said.