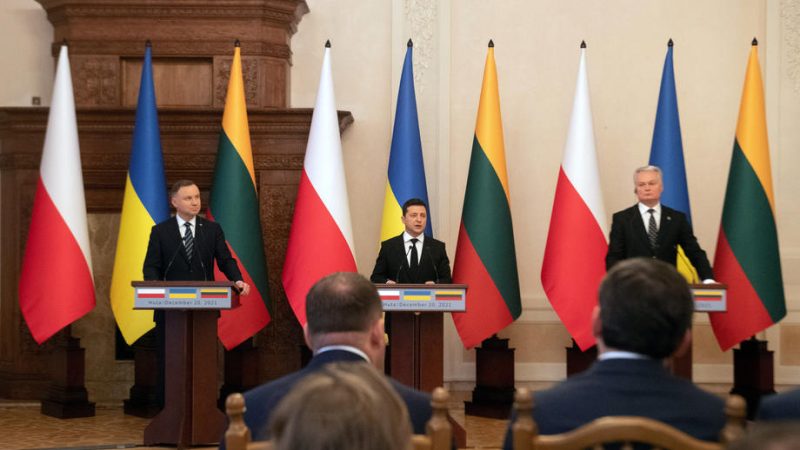 Monday’s talks between the three presidents mostly concerned the risk of escalation at the Ukrainian border. [EPA-EFE/ANDRZEJ LANGE]

President Andrzej Duda met with his counterparts Volodymyr Zelenskyi and Gitanas Nausėda at the first leaders’ summit of the Lublin Triangle, a new economic, cultural and political alliance between Poland, Ukraine and Lithuania, known as L3.

Monday’s talks between the three presidents primarily concerned the risk of escalation at the Ukrainian border.

“To prevent a possible escalation by the Russian Federation and the deteriorating security situation in Europe, the international community must take strong preventive steps, rather than reacting to events that have already taken place, as it was with the migration crisis on Poland and Lithuania’s borders with Belarus,” said Volodymyr Zelenskyi, the host of the summit that took place in Ukrainian village of Huta.

Referring to the migration crisis at the Poland and Lithuanian border with Belarus, the Ukrainian president expressed his solidarity with the two neighbours.

“Due to the failure of any attempts to repeat the same scenario in Ukraine, we are actively strengthening our own border,” he said, quoted by the presidential office. He also thanked Polish and Lithuanian leaders for their staunch support for Ukrainian membership of NATO and the EU.

According to Duda, historical records have shown that no ultimatums from countries, including Russia, can be accepted. “I think the biggest mistake is to agree to blackmail. We have to take a strong position. And this is exactly how NATO should behave, be consistent,” the Polish president said.

The three leaders signed a joint declaration, expressing support for Ukraine’s territorial integrity and appealing to the international community for a decisive approach towards Russia.

“Our position as the presidents of the Lublin Triangle on this matter is very clear: Ukraine’s security is a fundamental issue. We must not only stop a military attack on Ukraine, but we must do everything to prevent such an attack,” Duda added.

The Lublin Triangle, founded on 28 July 2020, aims to invoke the heritage of the 1569 Union of Lublin, creating the Polish-Lithuanian Commonwealth.