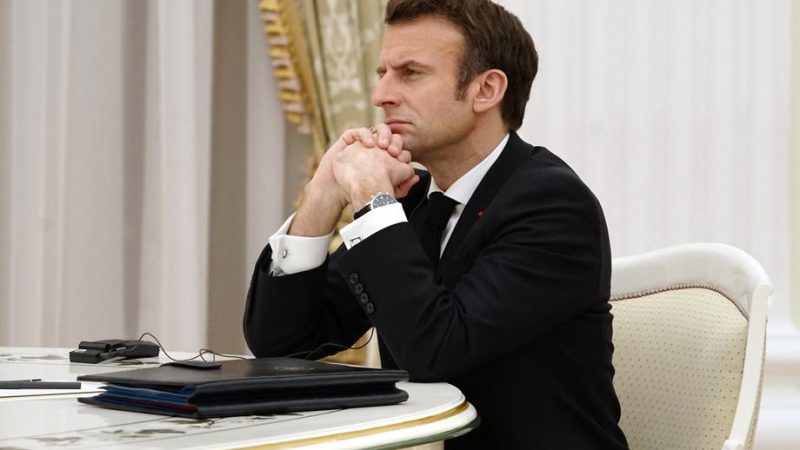 In the letter, Macron declares that he wishes to “continue to move our country forward”, particularly in the fight against inequality”. [EPA-EFE/KREMLIN POOL / SPUTNIK]

President Emmanuel Macron has officially announced his candidacy in the French elections due on 4 April to “invent with you [the French people], in the face of the challenges of the century, a unique French and European response”.

This candidacy announced in a “letter to the French” published in the regional daily press on Friday was no surprise.

But the war in Ukraine has turned the calendar of the current president upside down. Thus, less than six weeks before the first round of the election on 10 April, he ended the suspense.

In the letter, Macron declares that he wishes to “continue to move our country forward”, particularly in the fight against inequality”, so that “all children in France have the same opportunities […] priority will be given to schools and our teachers”.

France’s independence will also be a compass for his next five-year term if he is re-elected. It must be first and foremost economic independence which will be achieved through a “reduction in taxes on work and production” and investment in innovation and research.

Macron was almost forced to announce his candidacy because, even if he was neither legally nor constitutionally due to do so, the collecting of the 500 sponsorships of elected officials required to compete in the election ends Friday evening at 6 pm.

He enters the race for the Elysée Palace as the clear favourite, with over 25% in all polls and a clear advantage over his opponents, who are delighted that “the democratic debate [can] finally be held”, as Socialist candidate Anne Hidalgo declared.

Zemmour also welcomed Macron’s move, as “the whole of France has been waiting for our face to face”. Right-wing candidate Valérie Pécresse hopes “the French will not be deprived of a real democratic debate” and warns the outgoing president who, according to her, “will have to give an account” after a mandate of “lost illusions”.

For the moment, eleven candidates – potentially a maximum of twelve, if Philippe Poutou collects his sponsorships before tomorrow – are now qualified to compete in the election, which will take place in two rounds on 10 and 24 April.