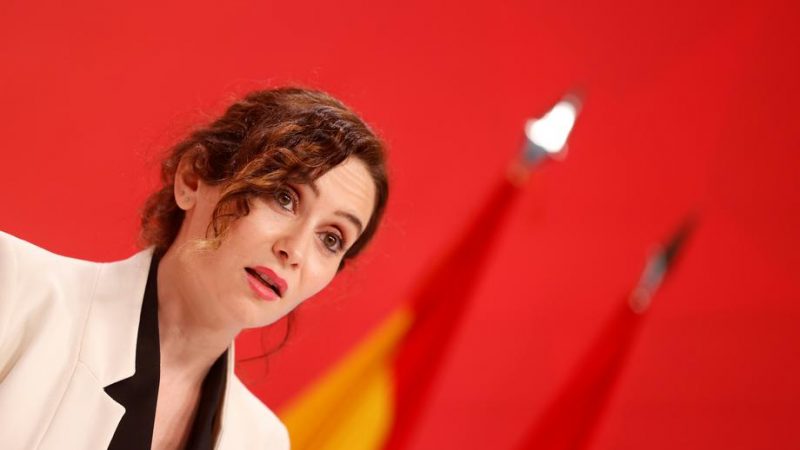 Thousands of protesters gathered outside the headquarters of Spain’s Popular Party (PP) in Madrid on Sunday in a show of support for the capital’s regional president Isabel Díaz Ayuso and to call on the conservative party leader Pablo Casado to step down.

Díaz Ayuso and Casado have recently been involved in a public rift that has caused issues in the PP.

The row erupted after PP’s leadership called for a probe into claims that Díaz Ayuso’s brother benefited financially from a face mask contract the Madrid regional government awarded to a company at the beginning of the pandemic.

The PP sought to lay the quarrel to rest with a meeting between the two this weekend, after which the probe was dropped. So far, efforts have remained fruitless, EURACTIV’s partner EFE reported.

Thousands of people packed the streets outside the PP’s nerve centre in central Madrid and hurled chants of  “Ayuso, president!” and “Casado, failure!”.

Ayuso, a rising star in the PP and widely tipped to be its leader in the future, last week slammed her party leadership for what she described as a smear campaign. She accused PP officials of approaching private detectives to “spy” on her, something Casado denied.

The original investigation into Díaz Ayuso sought to cast light on her government’s deal to secure PPE equipment from China via a Spanish company in a contract worth €1.5 million.

The regional president acknowledged that her brother received a payment of €55,580 for securing the delivery of masks from China to Madrid but insisted it was legal. Casado had talked of a sum worth €286,000.

Opposition parties filed a case with anti-corruption prosecutors, who will rule on the legality of the contracts in question, which were handed out when emergen cy measures were enforced to streamline deals.