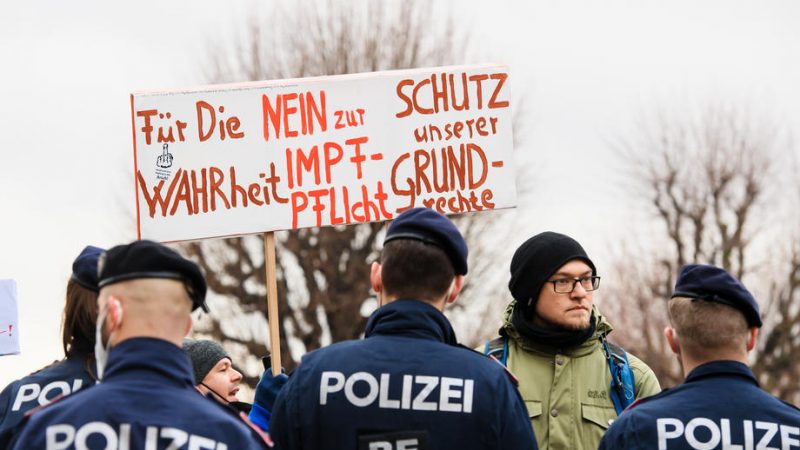 A man displays a banner reading ?Für die Wahrheit. Nein zur Impfpflicht. Schutz der Grundrechte? (For the truth. No to compulsory vaccination. Protection of fundamental rights) during a demonstration at the Ballhausplatz square. [EPA-EFE/CHRISTIAN BRUNA]

Due to technical complications, the registration of mandatory vaccines will only be possible by April, two months later than envisioned by the Austrian government. Meanwhile, experts are questioning the effectiveness of mandatory vaccinations.

While the government said it wants to stick to its February timeline, it will “take into account” the potential technical difficulties and might extend the period after which it will issue fines for the unvaccinated.

At the same time, academic voices criticising compulsory vaccinations are growing louder. According to epidemiologist Gerald Gartlehner, the highly infectious Omicron wave will accelerate immunisation at a speed “never seen before.”

“Therefore, compulsory vaccinations probably have to be reevaluated after the Omicron wave,” the professor at the Danube-University Krems stated in an interview with ORF.

Due to the delay in the implementation, compulsory vaccinations could come “too late for the Omicron variant,” Peter Bußjäger, constitutional lawyer at the University of Innsbruck, told Wiener Zeitung.

The COVID-19 Crisis Coordination unit (GECKO), the government’s main advisory body for the pandemic, calls for the situation to be reevaluated. Karl Stöger, a member of GECKO, said the law introducing compulsory vaccination should include options to delay the introduction. However, he also stated that compulsory vaccination is not “off the table” yet as potentially new variants after Omicron could make such a step necessary again.

Before the Omicron variant appeared, some European Commission officials, including EU executive chief Ursula von der Leyen, had said mandatory vaccination should be on the table as an option to convince people to get vaccinated.