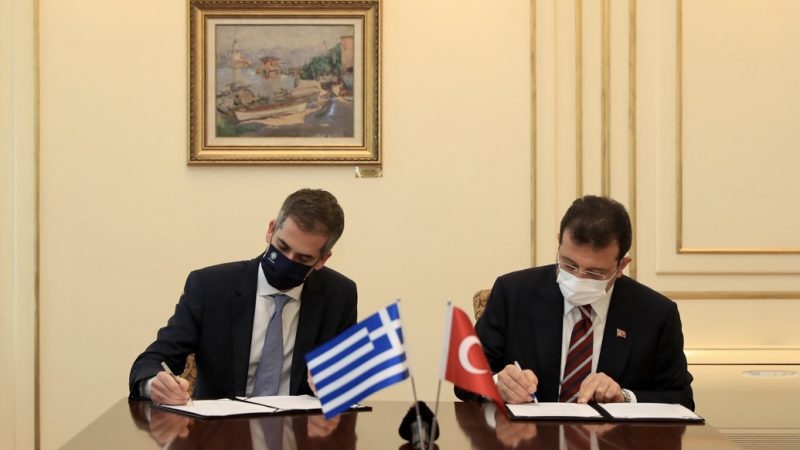 The mayors of Athens and Istanbul said they believe they can build bridges of communication, friendship and mutual understanding and proceed together to solve growing problems facing Greece and Turkey.

Imamoğlu, who comes from the opposition Republican People’s Party (CHP), dealt President Recep Tayyip Erdoğan a stinging blow by winning control of Istanbul in a re-run mayoral election in June 2019.

Imamoğlu is currently on a two-day official visit to Athens, following an official invitation from Bakoyannis, in return for the latter’s visit to the Turkish city last May, when the two mayors signed a memorandum of understanding and cooperation in the fields of culture and tourism.

Bakoyannis stressed that “problems are solved from the bottom up. People create them and people solve them. Even if governments create them, or to be exact, regimes, the people can solve them”.

The Greek mayor also stressed the need for the two sides to join forces “against the dark forces of cynicism, intolerance and patriotism”, and praised recently deceased composer Mikis Theodorakis’ “emblematic cooperation” with prominent Turkish intellectuals like Aziz Nesin, Yasar Kemal and Zulfu Livaneli for promoting the peaceful coexistence of the two peoples.

Imamoglou, for his part, also referred to Theodorakis, saying his recent death had also caused sadness in his country, as “with the sounds of his creations the hearts of many Turkish citizens have beaten loudly”. He also pointed out that as mayors “we have been entrusted with the terrible responsibility of finding the right solutions to the problems of the two big cities, the two metropolises”.