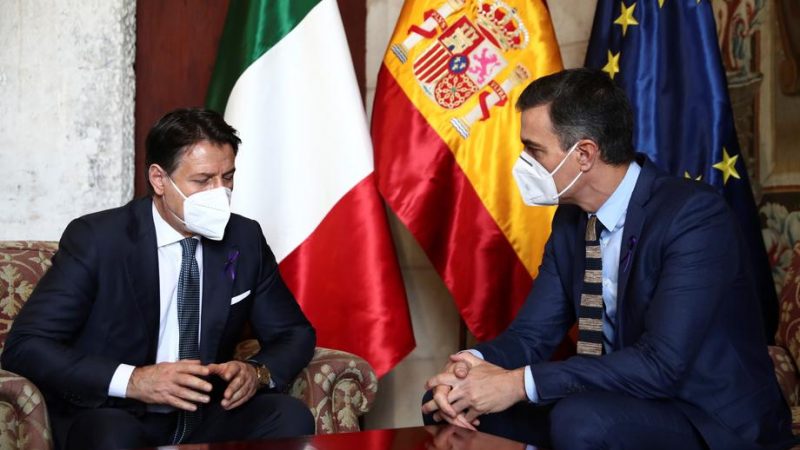 Leaders of Spain, Italy, Greece and Malta called on Wednesday for greater European solidarity with member states most affected by illegal immigration flows.

The joint declaration was signed during a Spanish-Italian summit held on Palma de Mallorca by Spanish Prime Minister Pedro Sánchez and Italian Prime Minister Giuseppe Conte, together with their Greek and Maltese counterparts.

However, they demanded more solidarity from the rest of the EU, and not only from countries through which migratory flows enter, and asked for this aspect to be clearly defined in the new EU migration pact.

The Mediterranean plea brings them yet again on a collision course with the Visegrad countries who already rejected the EU’s ‘mandatory solidarity’ plans for handling migrants.

The four countries stressed they appreciate the work done so far under EU auspices on a new pact on migration and asylum for the bloc, calling the latest proposal a “constructive starting point”.

It proposed that member states would have “flexible options” for how to share responsibility, with member states having to either accept asylum seekers, send back those who are denied entry, or offer financial assistance on the ground to front line EU states.

“This is not just a question of more money, but of actions that really match the interests of our partners, responding to their needs, and consequently being able to meet the operational needs of migration management,” they said.

In their joint statement, the four countries argued that the implementation of border check procedures, as well as the definition of the categories of persons to whom they should apply, should remain a competence of each member state, because they are the best placed to decide, for example, who is eligible, given their specific circumstances.

Furthermore, the four member states said the creation of large indoor centres at external borders is not acceptable and that asylum management should fully comply and respect human rights.

In the document, the group also stressed the need to boost agreements with third countries to tackle illegal immigration and clearly define the financial instruments to support such an effort, calling for special attention to be given to the EU’s southern neighbours.

To this end, they advocate building relations based on trust and equality through frequent political contact and suggested that third countries should be fully equipped to limit irregular migration flows.

Since January, more than 18,000 people have arrived illegally to the Canary Islands, more than half of them in the last 30 days. This has led to a situation not seen since 2006, when 31,678 immigrants landed on the Atlantic islands’ shores.

Visegrad countries had rejected the EU’s latest plans for handling migrants in September, after talks with von der Leyen in Brussels, and insisted that the plans for tougher new asylum rules do not go far enough.