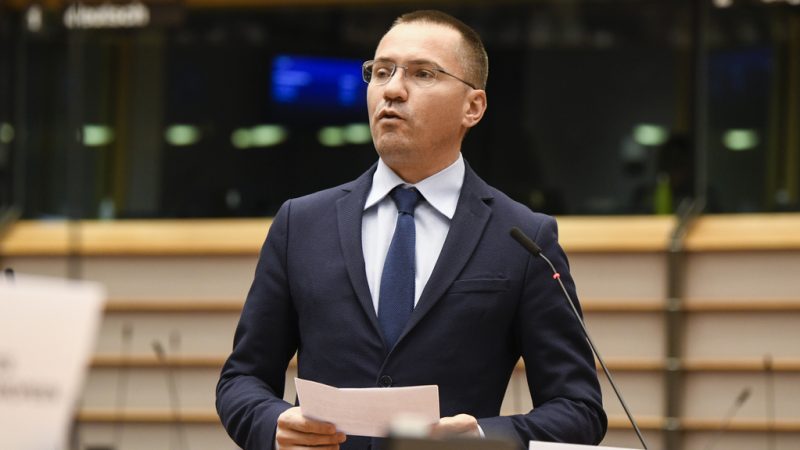 Each MEP has received a video showing their colleague Angel Dzhambazki (ECR) “throwing firecrackers and pouring water from a fire hose over people protesting in front of the VRMO party headquarters in Sofia”.

The video was emailed to 705 MEPs by the so-called ‘Poisonous Trio’, one of the groups of organisers of anti-government protests in Bulgaria, which lasted more than three months.

“We informed them (MEPs) that this person unfortunately sometimes works with them and that he is a part of the ruling coalition in Bulgaria,” said the trio about the email’s purpose.

With regards to the protests that took place in front of the VMRO party headquarters on Tuesday evening because the party supports Prime Minister Boyko Borissov’s government, Dzhambazki told EURACTIV Bulgaria that he did not throw mini bombs. According to him, the people in the party’s building responded to the aggression against them in a reciprocal manner.

Although the Conservative MEP said he believes in everybody’s right to protest, this one had not been peaceful.

“We have witnessed vandalism, demolition. After they attacked us with mini-bombs and broke the door, we had to defend ourselves, so we took out the fire hose,” explained Dzhambazki, adding that people in the building had thrown two mini-bombs just as two bombs were thrown at them. Moreover, the building was full of people, including a children’s choir, he added.

Dzhambazki is one of the most famous and active Bulgarian MEPs, who, besides getting caught for drink-driving, also had to apologise to a couple of MEP colleagues for making remarks on their origins. (Krassen Nikolov and Antonia Kotseva | EURACTIV.bg)