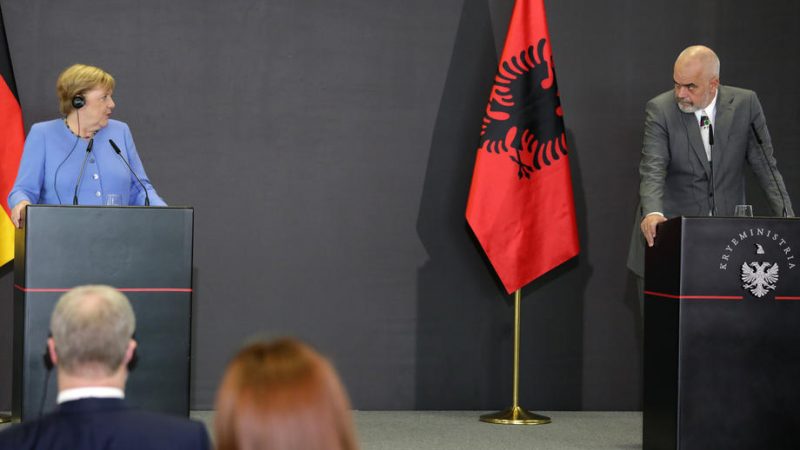 Rama thanked Merkel for choosing Albania as the last stop on her tour of the Balkans. [EPA-EFE/ MALTON DIBRA]

One of the statements after the meeting between Angela Merkel and prime ministers of six Western Balkans EU hopefuls underlined the need for further work on the so-called Berlin Process as one of the most important diplomatic initiatives since 2014, attributed to Merkel and aiming at the EU enlargement.

“From the geostrategic viewpoint, Germany has its own interest in the membership of the WB countries in the EU, but another cooperation at a regional level is an idea that has been accepted by the EU and Germany,” Merkel told a joint press conference with Albanian Prime Minister Edi Rama.

She also welcomed the Open Balkan initiative, which aims to replicate the Schengen zone’s free flow of people, noting that “it is a cooperation that strengthens the Berlin Process.”

Rama thanked Merkel for choosing Albania as the last stop on her tour of the Balkans. He said the ‘Open Balkan’ initiative is the “offspring” of the Berlin Process and the two initiatives do not contradict each other.

Zoran Tegeltija, BiH prime minister, complained to Merkel that Western Balkan countries have the impression that the EU is only creating an illusion of enlargement while doing the opposite in practice.

A change in such a policy would be an incentive for the implementation of reforms,” Tegeltija said. He also believes that the Western Balkan countries should be given a more significant role and participation in EU processes and closer ties with the EU even before the formal fulfilment of the criteria and conditions for membership.

Zoran Zaev, North Macedonia’s PM, told Merkel that his country’s EU integration process should be accelerated through a swift settlement of the dispute imposed by neighbouring Bulgaria. Zaev emphasised that the only acceptable proposal was made during the Portuguese EU Presidency, which takes into consideration the commitments of both sides.

Kosovo PM Albin Kurti said after the meeting that his government will introduce reciprocity with Serbia, adding that there can be no equality without reciprocity.

He reiterated Kosovo’s opposition to the regional initiative of Open Balkan, which stands in stark contrast to Albania’s support, saying the EU-backed Berlin Process is necessary and sufficient for the region’s European path and there is no need for alternatives.