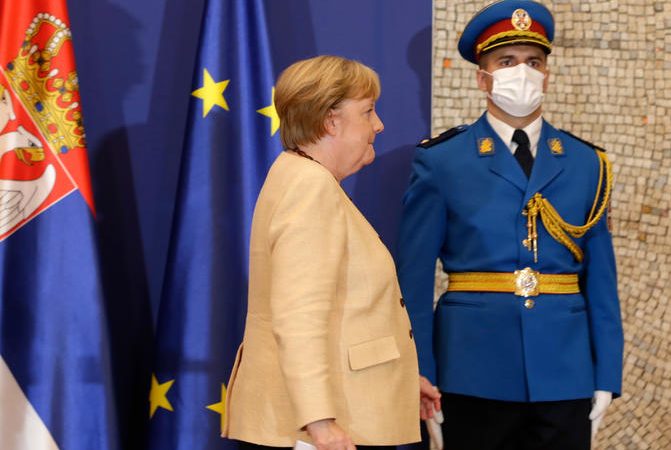 Merkel said the Kosovo question has to be closed before Serbia enters the EU, but first, all other open questions in the process of EU integration have to be solved. [EPA-EFE/ANDREJ CUKIC]

German Chancellor Angela Merkel said in Belgrade on 13 September that Serbia had progressed in reforms, but both Serbia and the entire region still had a long way to go in their EU membership bid.

“I know that the perception is that the process of EU integration is going slowly and that the EU is making new demands, but we do see a series of results and we do see progress […] the same conditions are required of all West Balkan countries,” Merkel told a joint news conference after a meeting with Serbian President Aleksandar Vučić.

She said the EU had a great geostrategic interest in seeing all West Balkan states admitted into the bloc, and warned of possible influences from other areas if the EU did not act quickly enough in certain situations.

She encouraged Serbia to make further strides toward being a ‘Rechtsstaat’‘ [country with functioning rule of law] and a pluralistic society, adding that economic successes should indicate that EU membership is a worthwhile goal.

Merkel said the Kosovo question has to be closed before Serbia enters the EU, but first, all other open questions in the process of EU integration have to be solved.

Asked whether the recognition of Kosovo, a former Serbian province that declared independence in 2008, is a precondition for Serbia’s EU membership, she said “certain questions have to be solved at the end off the process” of Serbia’s EU integration.

President Vučic said he was against freezing the clash between Belgrade and Pristina, indicating he was in favour of a “compromise solution”.

“I think it’s good for that problem to be solved by this generation instead of us leaving it to another. But it has to be a compromise solution, not a solution that will be humiliating and defeating for Serbia,” Vučić said.

Vučić stressed he was aware that resolving the Belgrade-Pristina relationship would be the basis for Serbia’s admission into the EU.

On 14 September, Merkel will travel to Tirana, where she will meet with Albanian Prime Minister Edi Rama. This will be followed by a lunch with the heads of all six Western Balkan governments, after which Merkel will separately meet with the prime ministers of Montenegro, Bosnia and Herzegovina, North Macedonia and Kosovo.