Merkel ups pressure on Lukashenko in call with Putin 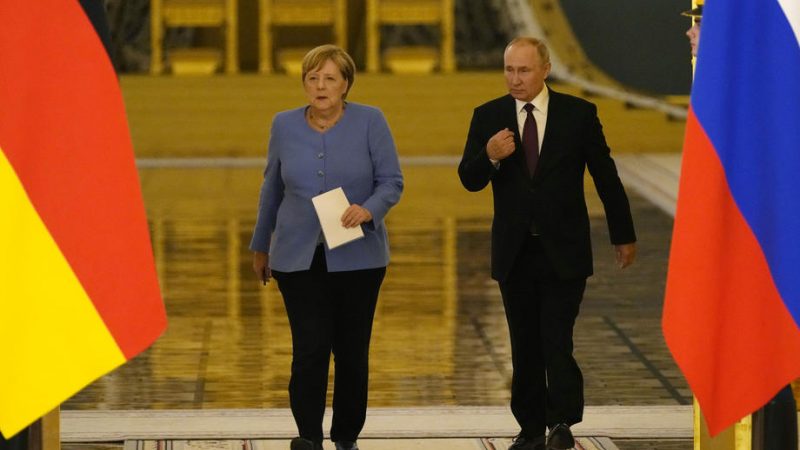 In a phone call with Russian President Vladimir Putin, Chancellor Angela Merkel discussed the situation at the Poland-Belarus border and sought to get Putin to exert his influence on Belarus. [EPA-EFE / ALEXANDER ZEMLIANICHENKO]

In a phone call with Russian President Vladimir Putin, outgoing Chancellor Angela Merkel discussed the situation at the Poland-Belarus border and sought to get Putin to exert his influence on Belarus’ strongman President Alexander Lukashenko.

The “instrumentalisation of migrants by the Belarusian regime was inhuman and unacceptable,” she told Putin, asking him to intercede with Belarus.

For Germany, which has been experiencing large numbers of migrants entering the country through Poland, Russia is the key to solving the ongoing Belarus migration crisis.

“The assessment on the German side is that the Russian leadership certainly has considerable influence in Minsk and with Lukashenko’s regime,” a German government spokesperson told journalists.

Putin suggested direct discourse between the EU states and Minsk, according to a statement from the Kremlin.

The ongoing stream of migrants and the Polish attempts at pushing back the migrants utilised by the Belarusian regime in a “hybrid attack” have also resulted in discontent among German political parties.

“The push-backs from the Polish side are legally inadmissible,” Lars Castelluci, interior policy expert of the social democrat SPD, told FAZ. “You can’t just leave people in no man’s land when they ask to be accepted into the EU,” he added.

Poland was defending “also the security of Germany,” said Tino Chrupalla, co-leader of the far-right AfD. “Poland needs our full solidarity in this situation,” he added.