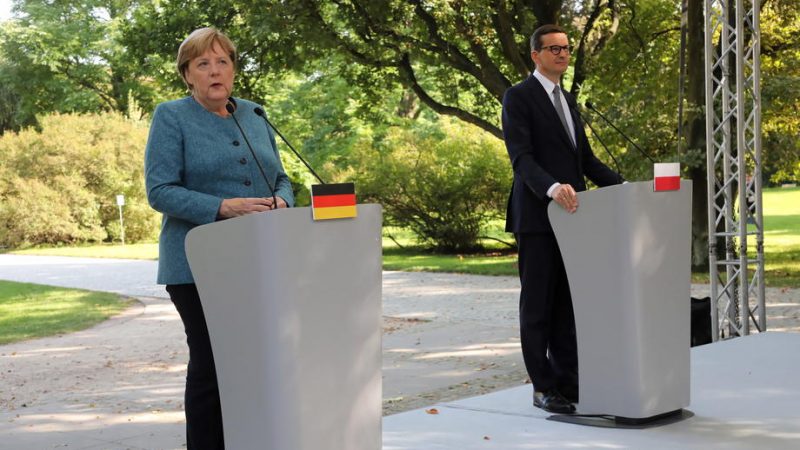 Morawiecki thanked the chancellor for years of cooperation. “Despite differences, there are areas when Poland and Germany act together”, he underlined. [EPA-EFE/ Wojciech Olkusnik]

Over the weekend, Angela Merkel paid her last trip to Poland as German chancellor, striking a conciliatory tone on Warsaw’s rule of law standoff with the EU.

Speaking alongside Polish Prime Minister Mateusz Morawiecki on Saturday, Merkel emphasized the importance of finding consensus: “Even if we face difficult problems, we discuss them and seek solutions”.

In previous years, Merkel has faced criticism that she could have done more to stop democratic backsliding in Eastern Europe during her time in office.

“On rule of law, we talked in-depth about this… We prefer this to be resolved through talks,” she said. “Resolving things with court cases is of course always a possibility in a country with a rule of law but politics is about more than going to court.”

Commentators welcomed Merkel’s pragmatism in relations with Warsaw governments over a 16-year long tenure, and “a soft spot for Poland”.

“Her sentiment for Poland was not only resulting from her personal and political biography, but from her pragmatism, and on the Warsaw side such pragmatism was lacking in recent years”, Adam Traczyk from Global.Lab said in an interview for Dziennik Gazeta Prawna.

The problems between Warsaw and Berlin are numerous. At the top of the list, besides the rule of law issue, has been the German approach to Nord Stream 2 pipeline.

“I made clear that it is our concern that Ukraine will remain a transit land for Russian gas,” Merkel told reporters in Warsaw. Morawiecki said making sure gas still transits through Ukraine despite the introduction of the Nord Stream 2 pipeline will lower the chance of “blackmail” from Russia.

Morawiecki thanked the chancellor for years of cooperation. “Despite differences, there are areas when Poland and Germany act together”, he underlined.

Back in 2005, Merkel’s visit was her second after going to Paris. She was applauded in the German Bundestag for taking care of good relations with the country’s eastern neighbour.

Sixteen years later, relations between Germany and Poland are lukewarm. A prominent observer of the Polish-German relations, Kai-Olaf Lange of Berlin’s Stiftung Wisenschaft und Politik (SWP) summarised the relationship between 2005 and 2021 as a period of “great expectations and missed opportunities”.

Polish President Andrzej Duda declined to meet Merkel due to “scheduling problems”, Merkel’s spokesman said on Friday. Duda’s office said he would instead travel to Katowice for celebrations to mark the anniversary of the anti-communist trade union Solidarity.