Metalworkers clash with police in Cadiz 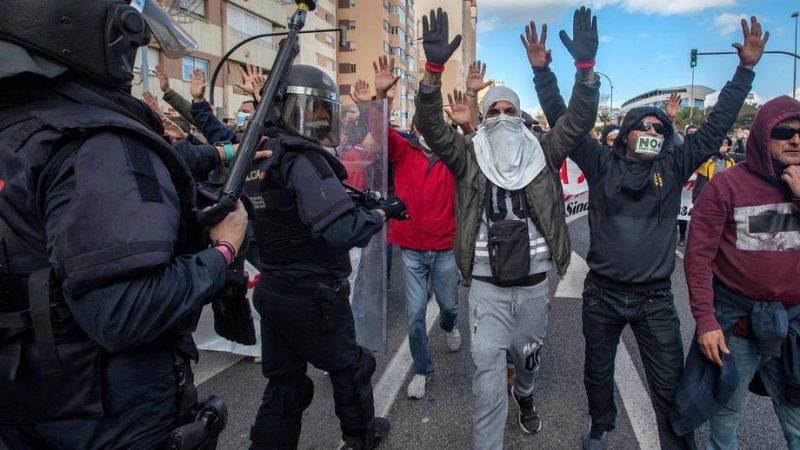 People attend a rally in support of metallurgical sector workers in Cadiz, southern Spain, 23 November 2021. The rally was called in support of the workers who are currently striking, demanding for a pay rise. [EPA-EFE/Roman Rios]

Spain witnessed a new wave of protests and clashes between metal workers and police forces in Cádiz, Andalusia, leaving some injured and sparking controversy over local police deployment of a light mobile tank (BMR) to contain the protesters, EURACTIV’s partner EFE reported.

On Tuesday, the most violent clashes were recorded in Puerto Real, where anti-riot units used tear gas, rubber bullets, and a light armoured vehicle to stop the strikers.  On Wednesday, however, the situation was tense but not as violent as the previous day, Spanish media reported.

Labour Minister Yolanda Díaz asked the Interior Minister Fernando Grande-Marlaska, to withdraw the BMR armoured vehicle used by the police against the protesters.

She said the use of such a vehicle was “unacceptable” and the police reaction “disproportionate”. Diaz added that the right to demonstrate for better economic conditions was anchored in the Spanish Constitution and should be fully respected.

“Minister Marlaska, take the tanks off the streets of Cádiz. You can always return them to the Minister of Defence”, said Jaume Asens, a member of Unidas Podemos (United We Can), a coalition partner in the Spanish government with the socialists of the PSOE.

Metalworkers in Cádiz have been demanding wage increases in line with inflation.  The Cadiz region has an unemployment rate of over 23%, and the region continues to lead national statistics in poverty and job insecurity.

Also on Wednesday, some 500 farmers from the fruit and vegetable sector, mainly from Almeria (Andalusia), rallied in front of the Spanish agriculture ministry, demanding urgent measures to help them face rising production costs which, they say are putting them “on the brink of the abyss”, EFE reported.

One response to “Metalworkers clash with police in Cadiz”